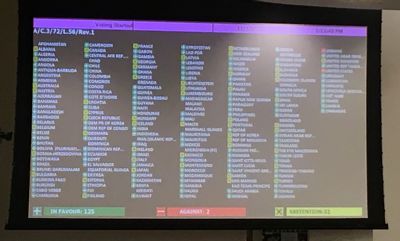 The results of the vote on the resolution, November 16, 2017
An attempt by the United States to revise a U.N. resolution that threatens free speech failed dramatically, as U.N. member states rejected the U.S.'s proposed amendments by a vote of 3 in favor (Israel, Ukraine, and U.S.), 81 against, and 73 abstentions. Instead, the Russian-sponsored resolution, "Combatting glorification of Nazism, neo-Nazism and other practices that contribute to fueling contemporary forms of racism, racial discrimination, xenophobia and related tolerance," was adopted in its original form by the Third Committee of the U.N. General Assembly on November 16, 2017, by a vote of 125 in favor, 2 against (Ukraine and U.S.), and 51 abstentions.Â

As the U.S. representative noted in her statement supporting the proposed amendments, the resolution "is an annual power play by one nation over its sovereign neighbors. It attempts to exert a sphere of influence over a region and strives to criminalize free speech and expression without any genuine effort to effectively combat actual Nazism, discrimination, or anti-Semitism." The U.S.'s proposed amendments would have eliminated the threats posed by the resolution to freedom of expression. Additionally, the U.S. amendment removed all references to the racist "anti-racism"Â Durban conferences andÂ Durban Declaration, which accused only Israel of being a racist state.