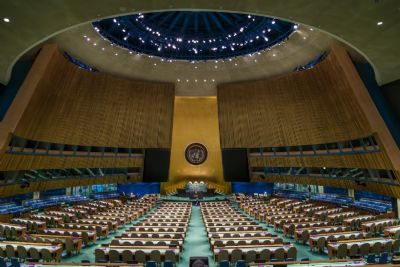 The UN General Assembly
A new group of human rights violators has been elected by the UN General Assembly to the UN's top human rights body, and Islamic states have increased their choke-hold over the institution. On October 20, 2017, the UN General Assembly chose new members of the UN Human Rights Council, each given three-year terms starting in January 2018. With today's election, human rights authority figures on the Council will now include the likes of the Democratic Republic of the Congo, Afghanistan, and Angola, along with Qatar which was re-elected. The process and the outcome are diametrically opposed to the Trump administration's demand for UN reform, making a pullout from the Human Rights Council compelling and timely.

The "election" was more sham than anything else. The process allowed UN regional groups to submit fixed slates, in which the number of states running was equal to the number of seats that the regional group was allotted. As part of the African regional group's fixed slate, the Democratic Republic of the Congo (DRC) and Angola won guaranteed seats. The fact that both are ranked by Freedom House in the lowest possible category of human rights protection ("not free") proved irrelevant. Angola received 187, and the DRC 151, of the 193 votes cast by the member states of the General Assembly - an extraordinary and appalling stamp of approval.

Also irrelevant to the "election" of the DRC, was the fact that the country had not even bothered to make a pledge to protect human rights. The UN General Assembly resolution that created the Council back in 2006 was heralded for providing "when electing members of the Council, Member States shall take into account the contribution of candidates to the promotion and protection of human rights and their voluntary pledges and commitments made thereto."

The DRC did manage this colorful one-page handout on the day of the election â claiming this notorious human rights abuser and contributor to refugee crises was a force of "stability of the African Continent."

When the system of pledging to protect human rights was not being simply ignored, it was being turned into a farce.

As part of its pledge Angola said: "[T]he Republic of Angola has remained engaged with the international human rights agenda by fulfilling its commitments to advancing human rights, consistent with its constitutional provisions, which broadly embrace the values and principles of democracy and the fundamental freedoms enshrined in key international instruments."

Actually, according to the U.S. State Department report on human rights in Angola: "The three most important human rights abuses were cruel, excessive, and degrading punishment, including reported cases of torture and beatings; limits on freedoms of assembly, association, speech, and press; and official corruption and impunity."

Afghanistan's pledge was accompanied by a slick 16-page color brochure that is short on words but has lots of color photos of dancing children, smiling women and flying birds, which provides this assurance: "since 2001, Afghanistan has moved towards the progressive realization of human rights values and principles."

Actually, according to the latest U.S. State Department report on human rights in Afghanistan: "The most significant human rights problems were... torture and abuse of detainees by government forces; widespread disregard for the rule of law and little accountability for those who committed human rights abuses; and targeted violence and endemic societal discrimination against women and girls."

As part of its pledge, Qatar said: "The promotion and protection of human rights is one of the policy pillars of the State of Qatar." It claims to have "a constitutional and legislative system that embodies the principles of human rights and fundamental freedoms, and respects and protects everyone." It says "the state of Qatar ... respects freedom of expression and judicial independence."

Actually, according to the latest U.S. State Department report on human rights in Qatar: "The principal human rights problems were the inability of citizens to choose their government in free and fair periodic elections... The monarch-appointed government prohibited organized political parties and restricted civil liberties, including freedoms of speech, press, and assembly."

Tallying the democracy and freedom scales for the winners, only six of the new members are ranked "fully-free" by Freedom House. This means that starting in January 2018, 21 of the 47 members â less than half â of the UN's top human rights body are even fully free democratic states. Notwithstanding their job is to sit in judgement of human rights performances the world over.

Last month, President Trump told the UN General Assembly on September 19, 2017: "it is a massive source of embarrassment to the United Nations that some governments with egregious human rights records sit on the U.N. Human Rights Council."

Two days later, U.S. UN Ambassador Nikki Haley pointed to the same membership issue and demanded change. In her words, we "need to see better-quality countries that are on that council in order for it to be effective, and obviously for the United States to stay on it. If we don't see changes in the Human Rights Council, we'll continue to advocate for human rights, but we'll do it on our own if we have to."

This wasn't the first time Haley had made this statement. She had given the UN ample notice, back on June 6, 2017 in Geneva that the United States would not legitimize the Council by remaining a member if the election process - and other flaws - remained unchanged. She said:

"...over half the current member countries fail to meet basic human rights standards as measured by Freedom House. Countries like Venezuela, Cuba, China, Burundi, and Saudi Arabia occupy positions that obligate them to, in the words of the resolution that created the Human Rights Council, "uphold the highest standards" of human rights. They clearly do not uphold those highest standards...If the Human Rights Council is going to be an organization we entrust to protect and promote human rights, it must change. If it fails to change, then we must pursue the advancement of human rights outside of the Council. America does not seek to leave the Human Rights Council. We seek to reestablish the Council's legitimacy. There are a couple of critically necessary changes. First, the UN must act to keep the worst human rights abusers from obtaining seats on the Council. As it stands, elections for membership to the Council are over before the voting even begins. Regional blocs nominate slates of pre-determined candidates that never face any competition for votes. No competition means no scrutiny of candidates' human rights records. We must change the elections so countries are forced to make the case for membership based on their records, not on their promises."

Along with changing the bias against Israel entrenched in the Human Rights Council's agenda, Haley promised:

"These changes are the minimum necessary to resuscitate the Council as a respected advocate of universal human rights. For our part, the United States will not sit quietly while this body, supposedly dedicated to human rights, continues to damage the cause of human rights."

And then nothing changed.

In this election - as in all the Council elections in the past - there were no conditions for membership that require a state actually protect human rights. The only requisite is getting a minimum of 97 votes, a majority of the 193 members of the General Assembly. Since fewer than half of U.N. members are themselves fully free democracies, vote-trading, and circling the wagons for one's comrades-in-arms, were the real deciding factors.

The question now is squarely before President Trump: will he follow through on the promises that he and his Ambassador made about a "Human Rights" Council that is a council of human rights authorities in name only - and resign?
Date
October 16, 2017
Title
UN Elects more Human Rights Abusers to its “Human Rights” Council: Will Trump Fulfill Promise to Pull Out?, UNWebTV
Original Source
http://webtv.un.org/live-now/watch/general-assembly-31st-plenary-meeting/5579656973001