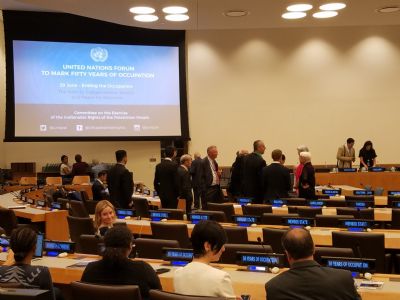 Participants gather for the "U.N. Forum to Mark Fifty Years of Occupation"
Participants in a UN "Forum to Mark 50 Years of Occupation", held in New York June 29-30, 2017, hailed Palestinian violence against Israeli Jews as legitimate "resistance," questioned the legitimacy of the Jewish state and used their UN platform to spread antisemitism. The forum was organized by the U.N.'s Committee on the Exercise of the Inalienable Rights of the Palestinian People, a body created in 1975 to implement the infamous General Assembly resolution declaring Zionism to be a form of racism. As planned, the event was an obsessive anti-Jewish and anti-Israel affair broadcast worldwide via a UN webcast.

Here is a sample of the hate-speech and encouragement of terror, not only tolerated, but promoted, at the United Nations.

"What does violence mean? If you are under aggression, do you have the right to defend yourself or not...Do people have the right to resist that or not? If they don't resist this intolerable injustice, they would be simply behaving as slaves... And even when we ask for punishment of the occupier, we are accused of being antisemitic."

"First of all, I want to say that I went to Chile, and I visited the Palestine Club, and I was so impressed, because on their shirts they used, instead of the number one, they used the map of Palestine. And then the Zionist Lobby organized a campaign and forced them to remove it, but they still kept it on the side, yes. And you could still see it."

[According to the map which Barghouti praised, all of Israel is "Palestine."] 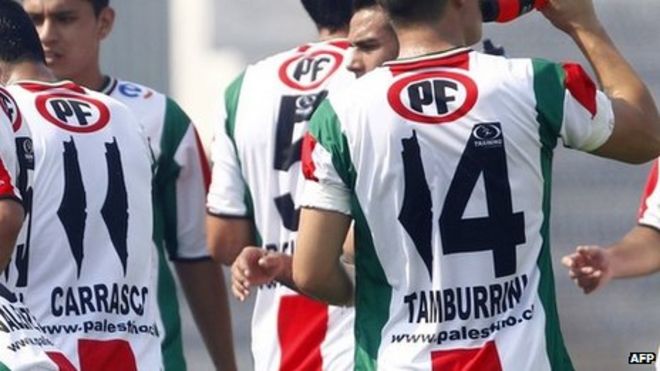 Riyad Mansour (Invited panelist and Palestinian UN Representative): "We were able to articulate the Declaration of Independence of the State of Palestine as a result of that collective, remarkable effort of the Palestinian people in the First Intifada."

[The First Intifada (1987-1993) involved at least "3,600 Molotov cocktail attacks, 100 hand grenade attacks and 600 assaults with guns or explosives" directed at both Israeli soldiers and civilians. 16 Israeli civilians and 11 soldiers were killed, 1,400 Israeli civilians and 1,700 Israeli soldiers were injured. Approximately 1,100 Palestinians were killed in clashes with Israeli troops. Nearly 1,000 Palestinians were killed in inter-Palestinian fighting (an "intrafada") between 1989-1992.

UN-accredited NGO Al-Awda representative: "If Israel has a right to exist as you say, in what form does Israel have a right to exist? Does it have a right to exist in the format that it exists now, which is a supremacist colonizing state in the [19]48 territories... Most recent polls indicate that most Palestinians actually want one state and the only solution they see to their grievances is resistance..."

Saeb Erekat (UN-invited panelist and Secretary-General of the Palestine Liberation Organization): "Hamas and the PFLP [Popular Front for the Liberation of Palestine] are not terrorist organizations....You believe you can maintain the status quo? You believe you can continue enforcing an apartheid deeper than the one that existed in South Africa and get away with it?"

[Both Hamas and the PLFP (Popular Front for the Liberation of Palestine) are listed as foreign terrorist organizations by the United States and by the European Union.]

Galia Golan-Gild (UN-invited panelist, Interdisciplinary Center Herzliya): "There's spoilers on both sides, with the Islamists, the Hamas and Islamic Jihad on one side, the settlers, the Jewish settlers on the other side..."

Cuba: "The Palestinian people have been victims...[of] massive flagrant violations of their human rights and on a continuous basis murdering of thousands of their children..."

Tania Hary (UN-invited panelist, Executive Director for the NGO Gisha, Legal Center for Freedom of Movement): I also want to highlight that I think that this is particularly a kind of policy of hubris and cruelty. I think that what's happening in the Gaza Strip and what's been happening now for at least the last 10 years is one of the biggest experimentation projects on the planet. The idea is, how do you test the breaking point of 2 million people?"

Wesam Ahmad (UN-invited panelist, from the UN-accredited NGO Al Haq): "Much of the Israeli economy is controlled by a select number of holding companies, or groups, or families. And these issues, I think, allow us to look at this issue of the economic interests...The Jewish community as a whole when this issue of economics playing a role in perpetuating the conflict leads to the question...is this conflict continuing in order to line the pockets of key individuals? And is the Jewish faith being used and exploited in the same way that the natural resources of Palestine are being exploited to achieve these ends?"

"So I think a question that I would like to see answered or a general opinion is, is the Jewish religion being exploited for economic gains by a key elite segment within Israeli society? And are they the ones that are driving this conflict..."

Aida Touma-Sliman (UN-invited panelist, a Knesset Member from the Joint List (alliance of Arab parties) "If the so-called Zionist left-which I don't agree that there is such a creature, there is no way of Zionism and left together [applause]."

Organization of Islamic Cooperation (OIC) representative: "...Israeli surrounded themselves with...psychological walls that enabled them to live in peace with the idea of occupation: First, they believe that they are the chosen people and accordingly chosen people can do whatever they like, no question about this. Second, and this is more serious actually, the Palestinians are not human beings, they don't have human rights, and accordingly there is no question about human rights."

Mustafa Barghouti (UN-invited panelist, Member of the PLO Central Council, the Palestinian Legislative Council, and General Secretary of Palestinian political party the Palestinian National Initiative): "So Israel continues to bring people to Israel. They have a lot of money, and they use it... We are encountering a very well-organized structure. And by the way, Israel has built a very powerful lobby in the States."

Mona Khalil (UN-invited panel moderator, UK-based organization "Independent Diplomat") asks: "...rather than naming and shaming Israel, such resolutions and recommendations have more often than not resulted in Israel's ability to name and shame the UN and the Human Rights Council as anti-Israeli and antisemitic. So how do you pursue justice and the rule of law in occupied Palestine without falling into the latter trap?"

Wesam Ahmad (UN-invited panelist, from UN-accredited NGO Al Haq) responds: "That is a very good question, Mona, and it's an issue that we face on a regular basis of how to address the seemingly absurd argument that the work that we are doing is somehow antisemitic... And it is something that we have to continue to push forward and not be silenced by this attempt to cover all activity, all criticism of Israeli policy as somehow being antisemitic...or the distinction between Judaism and the Zionist ideology that led to the creation of the State of Israel..."

Hagai El-Ad (UN-invited panelist, Executive Director of the NGO B'Tselem) responds: "I think this is an essential question...[T]his accusation [of antisemitism] is a propaganda line by the Israeli government is...Now it's-I'm saying this with bitter cynicism, but this is very real. And this is being deployed systematically as a silencing tool with a very clear agenda. The clear agenda is to successfully perpetuate the occupation while continuing to minimize international consequences."

Galia Golan-Gild (UN-invited panelist, Interdisciplinary Center Herzliya): "I think the accusations of antisemitism, at least in Israel, is part of the psychological manipulation of the public where they will say that the resistance by the Palestinians, or violence, or whatever, that's not opposition to the occupation. It was there even before the occupation. They hate us because we're Jews which is, of course, what they try to say using antisemitism outside as well."