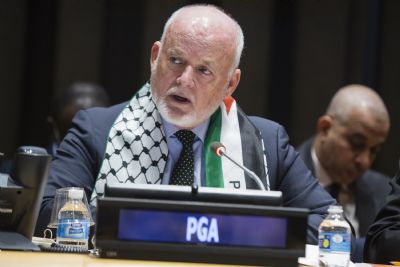 Peter Thomson, the President of the U.N. General Assembly, wearing a pro-Palestinian scarf during the 2016 U.N. Day of Solidarity with the Palestinian People
On June 29 and 30, 2017, a U.N. committee will hold a "Forum to Mark Fifty Years of Occupation" aimed at demonizing Israel, encouraging violence and the hatred of Jews, and rewriting history. The forum has been organized by the U.N. "Committee on the Exercise of the Inalienable Rights of the Palestinian People" (CEIRPP), which was created on the same day as the infamous "Zionism is racism" resolution in 1975. Although the resolution was ultimately rescinded in 1991, the committee created to implement its antisemitic message was left in place and continues to operate.

Among the invited speakers are a host individuals hand-picked by the U.N. Committee because of their known support for Palestinian terrorism, involvement in incitement to violence, and promotion of antisemitism. They include:

Saeb Erekat (Secretary-General of the Palestine Liberation Organization): "We are protecting ourselves with the bodies of our sons and daughters, because Israel does not protect itself, but rather its crimes, occupation and settlement... Whoever wants to fight ISIS and terror in the region, must understand that this can't be done without drying up the quagmire of Israeli occupation in the region.'"

Mouin Rabbani (Institute for Palestine Studies): "...Netanyahu is the heir to that faction of the pre-state Zionist movement eventually known as revisionism, which was in fact inspired by fascism, albeit an Italian variant led by Mussolini. Um, and during World War II, in 1941, one faction of that movement, which was eventually led by Yitzhak Shamir, made an approach to Nazi Germany, during the Holocaust I should add, proposing an alliance with Berlin against the British, who then ruled Palestine. So, there's a long history here. Netanyahu today is the heir and the leader of that wing of the Zionist movement."

Nabil Elaraby (Secretary-General of the League of Arab States): Speaking of Israel Elaraby "...said the country 'has truly become the last bastion of fascism, colonialism and racial discrimination in the world."
"Israel has unleashed war. It is a war of racism... The Israeli government has adopted a law to strengthen the Jewish essence of Israel...Israel has ... committed crimes and massacres, horrible massacres, of Palestinian people...These are crimes described as war crimes, as genocide..."

Robert Blecher (International Crisis Group): "Hamas had little to lose on the eve of June 25, when a raid by its military wing and two other armed groups captured Cpl. Gilad Shalit and killed two of his fellow soldiers at the Kerem Shalom army post on the Gaza-Israel border. Ever since the Islamist party formed a government in March, it has been systematically denied the resources necessary for domestic governance and the ability to implement a foreign policy... Israel, the US and the European Union refused to accept the new Palestinian government as a negotiating partner, turning back the diplomatic clock to September 1, 1975, when Secretary of State Henry Kissinger committed the US not to talk to the Palestine Liberation Organization unless it renounced terrorism and accepted Israel's right to exist."

Mustafa Barghouti (Al Bubadara Secretary-General):While serving as the president of the Palestinian Medical Relief Society, his organization wrote "The segregationist apartheid-style policies employed by the Israeli authorities and the subsequent restrictions imposed on the Palestinian people are in contravention to multiple international declarations and conventions to which Israel is party. Israel has been internationally condemned for the racist ideology and the collective punishments which it employs against the Palestinian population... "

Rebecca Vilkomerson (Jewish Voice for Peace): "... there have been attacks on Israeli civilians too. These are a horrifying symptom of ongoing occupation and repression..."

Helena Cobban (Just World Educational): "Ever since the early ethnic cleansings of 1947-48, the Palestinian people has suffered from the linked horrors of dispossession, dislocation..."

Jody Williams (Nobel Women's Initiative): Signatory to an open letter published in the Guardian during the midst of the 2014 Gaza War (when Hamas terrorists were trying to infiltrate Israel through terror tunnels, firing rockets at Israeli civilians and using the Palestinian population as human shields) that included: "Israel has once again unleashed the full force of its military against the captive Palestinian population...in an inhumane and illegal act of military aggression...We call on the UN and governments across the world to take immediate steps to implement a comprehensive and legally binding military embargo on Israel, similar to that imposed on South Africa during apartheid."

Dianna Buttu (Palestine Liberation Organization Former Legal Advisor): "I think we can't delude ourselves into believing that Zionism isn't an enemy of the Palestinian people, it is... I think we really have to question and start challenging Zionism, Zionism as a whole, not just Zionism as it pertains to the 67 borders, not just Zionism in terms of Greater Israel, but Zionism as a concept and the way that it has been implemented that seeks to replace one people with another, and that is something that we really have to start questioning... There is something actually innately antisemitic about the concept of Israel..."

The CEIRPP also intends to use the occasion to further U.N. support for the anti-Israel Boycott, Divestment, and Sanctions ("BDS") campaign, aimed at the economic strangulation of the Jewish state. Among invited BDS supporters are Omar Shakir, David Wildman, and Wesam Ahmed:

Omar Shakir (Human Rights Watch): At a past meeting organized by the CEIRPP, Shakir "called the Member States to ensure that businesses stop operating in, financing, servicing, or trading with Israeli settlements..."

David Wildman (United Methodist Church): At a prior CEIRPP meeting held at U.N. Headquarters Wildman said: "I have therefore also been very involved in the boycott, divestment and sanctions efforts of many sectors of civil society."

Wesam Ahmed (Al Haq): At a CEIRPP meeting held in Vienna Ahmed said: "Another avenue of action was to challenge third States and private corporations over their relations with Israel. Counterproductive actions, on the other hand, included permitting Israel to join the Organization for Economic Cooperation and Development (OECD) or holding a Union of European Football Association (UEFA) meeting in Tel Aviv. Those recent actions suggested to the Israeli people that life was normal..."
Date
June 28, 2017
Title
UN Headquarters to Hold 2-day Conference to Justify Killing Israelis