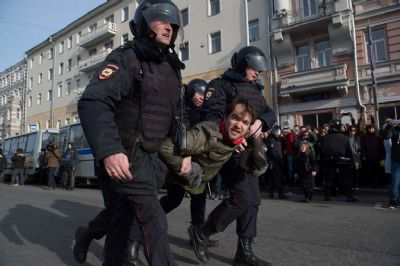 An anti-corruption protester arrested in Russia (File photo)
A UN Committee. charged with allowing non-governmental organizations (NGOs) to gain greater access to the UN, continued its bi-annual session on May 25, 2017 by blocking access to NGOs that promote women's rights and anti-corruption measures. Members of the UN NGO Committee include Iran, Russia, Cuba, Pakistan, Turkey, and Nicaragua, all of which actively use their Committee membership to stymie applications for UN status from NGOs active in the field of human rights.

Using procedural ruses, members of the Committee can, and often do, defer applications session after session with inappropriate, specious or repetitive questions and demands of the NGOs.