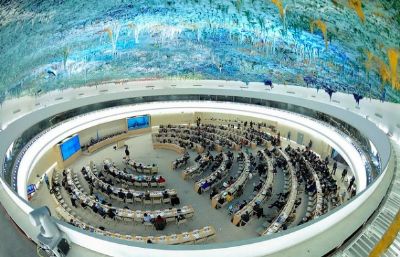 UN staff assigned to the Council can allot rooms to UN-accredited NGOs for the purposes of holding "informal meetings" during Council sessions. Facilities are allegedly authorized only - in the words of the UN request form - for "meetings of relevance to the work of the Human Rights Council."

The session was entitled: "Human Rights in Occupied Palestinian Territory" and was sponsored by UN-accredited NGOs Meezan Association for Human Rights, the International Organization for the Elimination of All Forms of Racial Discrimination(EAFORD), International-Lawyers.Org (all accredited with special consultative status by the UN Economic and Social Council), and by the Geneva International Centre for Justice (GICJ), which is not UN-accredited.

Such meetings use UN facilities that are deliberately in close physical proximity to the Council and its attendees from around the world. In addition, the UN distributes information about these NGO meetings in what is called a "Bulletin of Informal Meetings."

Here is just some of what was said at today's session:

"Israel has been working since 1948, and the Zionist movement before 1948, in what is a settler colonial project to settle in Palestine, to establish a Jewish home in the state of Palestine. This colonial project has come at the expense of the Palestinians, as we can notice in the last century. Israel's policies we can sum it up under a project of Judaization, the Judaization of Palestine, Israel and the OPT [Occupied Palestinian territory], comes with settlements, but it aims to reconstruct the geography of Palestine. It comes with the reconstruction of the space and history and geography and heritage of Palestine. Together with this elimination and erasure of what is Palestinian, it has to be replaced with a Jewish presence, with a Jewish history, with a Jewish heritage, which it might have existed indeed, but it is being exaggerated and replacing the Palestinian, and it is being exploited, and here is the main problem, for political aspirations and ambitions that come at the expense of the Palestinians. Settlements are only one part of this, one expression of the policy of Judaization and the settler colonial project."

"We have been discussing settlements, human rights, apartheid. We want a free discussion of these issues on our campuses. We know in the UK, for example, there is an organized campaign to ensure that student bodies do not discuss this issue and anyone who discusses Zionism, for example, is regarded as an antisemite. We want there to be a space for young students to explore new ideas concerning these matters...Take, for example, the notion, that Israel is a democracy, Western leaders, institutions, people in high office tell us "this is the only democracy in the Middle East." Well we say, and they know, that democracy can decline, it can be distorted, it can fail, as it failed in Europe in the 1920s and it failed in the 1930s and the consequences were fascism and Nazism. The failure of democracy in Israel today has led to what? To apartheid, the failure in that society has led to a system of racial domination, of discrimination, institutionalized discrimination."

With the new U.S. administration deciding to stay on the UN Human Rights Council, for an as yet indeterminate period of time, American taxpayers just paid 22% of the costs of the meeting room, the heat, the microphone, the audio visual machine, and the UN announcement of this event. An event that reeked of antisemitism and incitement to destroy the Jewish state.
Date
March 17, 2017
Title
Informal meeting on sidelines of the UN Human Rights Council, “Human rights in Occupied Palestinian Territory,” sponsored by Meezaan Center for Human Rights, an UN-accredited NGO
Original Source
http://www.ohchr.org/EN/HRBodies/HRC/RegularSessions/Session34/Documents/BIM-HRC-34-15.doc
Attachment
Click here to view this document in MS Word/PDF format
Note
To access the original URL on the UN extranet site a login is required:
username: hrc[space]extranet
password: 1session