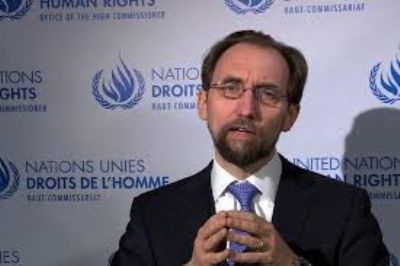 UN High Commissioner for Human Rights Zeid Raad Al Hussein (File photo)
On July 19, 2016, the spokesperson for the UN High Commissioner for Human Rights, Jordanian Zeid Ra'ad Al Hussein, expressed "concern" about Israeli legislation requiring NGOs that receive more than half their funding from foreign sources to disclose their donors, and claimed that civil society was being "attacked." But the High Commissioner had nothing to say about actual attacks against Israelis committed in the same week, including the attempted Palestinian suicide bombing on a light rail in Jerusalem on July 17, 2016, and the stabbing of 2 Israeli soldiers on July 18, 2016.

In the words of the spokesperson:

"We are concerned at the passing on 11 July of the so-called NGO Transparency law by the Israeli Parliament, which could have a detrimental effect on human rights and the democratic space in the country. Given the recent attacks against civil society organizations in Israel by public officials and some specific groups, we fear that this law will have a chilling effect on human rights defenders and their legitimate and extremely valuable contribution to the human rights debate in Israel..."
Date
July 19, 2016
Title
Press Briefing Notes on Turkey, Israel and Bahrain, Spokesperson for the UN High Commissioner for Human Rights
Original Source
http://www.ohchr.org/EN/NewsEvents/Pages/DisplayNews.aspx?NewsID=20284&LangID=E
Attachment
Click here to view this document in MS Word/PDF format