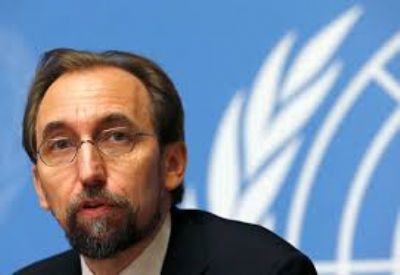 Speaking at the opening of the 29th session of the Human Rights Council in Geneva on June 15, 2015, the High Commissioner raised concern about the human rights of Palestinians. And nothing about the human rights of Israelis. Notwithstanding ongoing rocket fire from Gaza into Israel, targeting Israeli civilians and clearly a war crime, the High Commissioner never once named Hamas. Nor did he mention Hamas abuses of its own people, which include extrajudicial killings and torture of Gaza residents. His only call to action was directed to Israel.

In his words, "The continued presence and expansion of Israeli settlements and related activities, as well as settler violence, remain at the core of most of the violations of human rights in the Occupied Palestinian Territory, including East Jerusalem, and I repeat my calls to Israel to end immediately the expansion of the settlements, and to address settler related-violence."
Date
June 15, 2015
Title
Opening Statement to the 29th Session of the Human Rights Council by the High Commissioner for Human Rights, United Nations
Original Source
http://www.ohchr.org/EN/NewsEvents/Pages/DisplayNews.aspx?NewsID=16074&LangID=E
Attachment
Click here to view this document in MS Word/PDF format