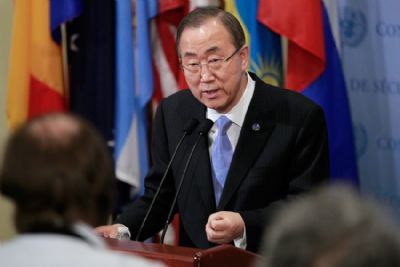 UN Secretary General Ban Ki-moon
The Arab League met in Egypt on March 28, 2015 in the midst of a bloody coup in Yemen, the Saudi air force bombing parts of Yemen, Iraq and Syria experiencing catastrophic intra-Muslim violence, and Islamist terrorists attacking across Arab countries. In this context, the United Nations' contribution was to help push Israel to the top of the agenda as a central threat to peace in the Middle East. UN Secretary General Ban Ki-moon told participants: "Today, war and violence in the region, reprehensible acts of terrorism, and the seemingly endless Israeli occupation of Palestine are causing enormous suffering. The impact of all these threats transcends the Arab world. They pose a direct challenge to international peace and security..."

In addition, instead of calling for the rejection of the terrorist organization Hamas, the Secretary General urged Palestinians to unite with it. In his words: "I urge the Palestinians to overcome their divisions."
Date
March 28, 2015
Title
STATEMENT: Secretary-General’s remarks at the 26th Ordinary Session of the Council of the League of Arab States, United Nations
Original Source
http://www.un.org/sg/statements/index.asp?nid=8500
Attachment
Click here to view this document in MS Word/PDF format