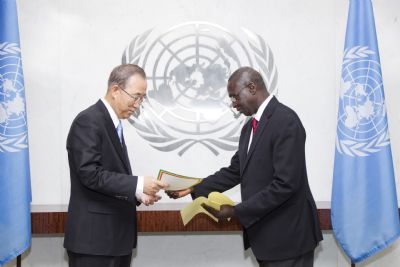 The meeting included Jens Toyberg-Frandzen, UN Assistant Secretary-General ad interim for Political Affairs, referring to "the suffering of the people in Gaza in the aftermath of the summer's brutal conflict." The UN spokesperson made no mention of any Israeli suffering from Hamas's rocket and terror-tunnel attacks. Hyperbole and demonization is the norm at UN events on Israel. Chairman of the UN Committee, Fode Seck of Senegal, said "Palestine" constitutes "a gaping 'black hole' on the map where international law and human rights seemingly do not apply." Parliamentarians from states which have no rule of law lectured the democratic state of Israel how to respect law. Nour Eddine Bouchkouj, Secretary-General of the Arab Inter-Parliamentary Union - there being no democratic Arab state - promoted more Arab terrorism. He "called on the Palestinian people to maintain their struggle to attain all their rights." Syed Nayyer Hussain Bokhari of Pakistan, President of the Asian Parliamentary Assembly, accused Israel of "carnage in Gaza," and using "excessive and disproportionate force." A participant from Mexico's parliament called on Israel "to end acts bordering on genocide against the Palestinian people."
Date
November 21, 2014
Title
“International Meeting of Parliamentarians in Support of Israeli-Palestinian Peace Considers Lawmakers’ Role in Upholding Respect for International Law” (Press Release), GA/PAL/1318, UN Committee on the Exercise of the Inalienable Rights of the Palestinian People
Original Source
http://www.un.org/press/en/2014/gapal1318.doc.htm
Attachment
Click here to view this document in MS Word/PDF format