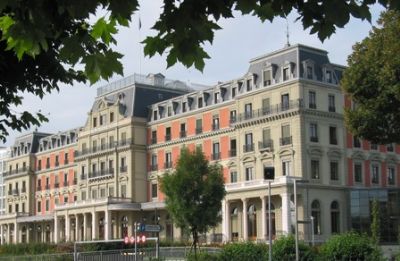 Palais Wilson, headquarters of the Office of the UN High Commissioner for Human Rights, Geneva, Switzerland
The spokesperson for the UN Office of the High Commissioner for Human Rights has said that 5 of 8 human rights treaties which "Palestine" signed and acceded to on April 2, 2014, entered into force for "Palestine" on May 2, 2014. The treaties are:

Spokesperson Colville also said that the Optional Protocol to the Convention on the Rights of the Child on the involvement of children in armed conflict will enter into force for "Palestine" on May 7, 2014, and the two major treaties, the International Covenant on Civil and Political Rights and the International Covenant on Economic, Social and Cultural Rights, will enter into force for "Palestine" on July 2, 2014.

What is conspicuously missing from this list are all the provisions in these human rights treaties, or their associated "protocols," that permit individuals to complain of violations of human rights by the ratifying party.

In other words, "Palestine" is only too happy to appear to be interested in human rights protection, but it won't allow Palestinians to hold them to it by empowering people to complain if it doesn't.

For instance, the Torture Convention and the Racial Discrimination Convention in theory permit individuals to complain of violations of the two treaties. But "Palestine" refused to agree to these discretionary features.

Other complaint provisions are associated with the two covenants on civil and political rights, and economic rights, and the conventions on women's rights, children's rights and disability rights. There is no indication that "Palestine" is acceding to any of them - effectively excluding any Palestinian from complaining to UN bodies about "Palestine's" violations of their new rights.

Despite this glaring omission, spokesperson Colville proceeded to praise the Palestinians for "a significant step towards enhancing the promotion and protection of human rights". He said

"I believe, but am checking this, that Palestine is the only country in the whole of the Middle East and North Africa not to make a single reservation on any of the treaties it has ratified...This was a lot of treaties to ratify in one go. But in the end this is really a cause for celebration, and for a State to ratify so many treaties in one go is really commendable."

He also added that the High Commissioner for Human Rights, Navi Pillay, "commend(s) the commitment of the State of Palestine to be bound by the international human rights standards."

The truth is that the UN rushed through the "Palestine's" treaty accessions ignoring that it fails to meet the legal qualifications for statehood, and every one of these treaties requires that signature and accession is open only to "states."

On April 2, 2014 the Palestinian Authority officially asked that the "state of Palestine" become a signatory to 21 international conventions. On April 10, 2014 StÃ©phane Dujarric, Spokesman for the UN Secretary-General confirmed that "instruments of accession to 14 multilateral treaties" which were received on April 2, 2014 "were in due and proper form".
Date
May 2, 2014
Title
REGULAR PRESS BRIEFING BY THE INFORMATION SERVICE
Original Source
http://www.unog.ch/unog/website/news_media.nsf/(httpNewsByYear_en)/01B2AC757FEBC091C1257CCC0043B609?OpenDocument
Attachment
Click here to view this document in MS Word/PDF format