Hamas Thanks UN For Taking Its Side Against Israel 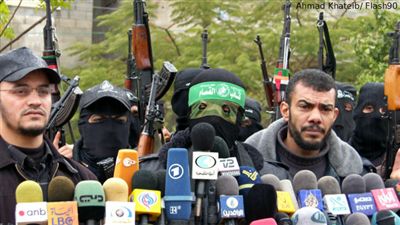 Hamas members
"Hamas on Wednesday issued a statement essentially thanking the United Nations Educational, Scientific and Cultural Organization (UNESCO) for siding with the terrorist group in its struggle against Israel.

A day earlier, UNESCO's World Heritage Council passed a Jordanian-sponsored resolution calling Israel 'the occupying power' on the eastern side of Jerusalem, including the Old City, Temple Mount and Western Wall.

The resolution reaffirmed past UN decisions denying any Jewish religious or historical connections that would give Israel claim to that half of the Holy City.

In response, Hamas spokesman Abdel Latif al-Qanua said that the international community had taken another important step toward defeating what he called the 'false Israeli narrative' regarding Jerusalem.

He urged the UN to follow up with firm action on the ground to 'save Jerusalem and Al-Aqsa Mosque from Judaization, excavations and Zionist projects.'...

The United States under President Donald Trump has repeatedly condemned UNESCO and other UN bodies for their obsession with Israel, and has threatened to withdraw American funding if the situation is not remedied."
Date
July 6, 2017
Title
Hamas Thanks UN For Taking Its Side Against Israel, Israel Today
Original Source
http://www.israeltoday.co.il/NewsItem/tabid/178/nid/31940/Default.aspx
Attachment
Click here to view this article in MS Word/PDF format