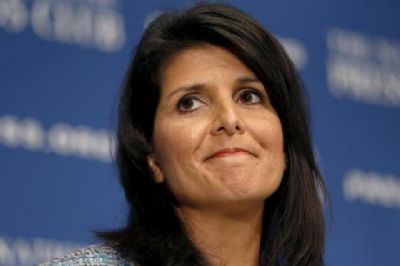 'Nowhere has the UN's failure been more consistent and more outrageous than in its bias against our close ally Israel,' Republican South Carolina Governor Nikki Haley said in the opening remarks for her appearance on Wednesday before the Senate Foreign Relations Committee.

'Any honest assessment also finds an institution that is often at odds with American national interests and American taxpayers,' the speech says.

In the remarks, Haley offered some praise for UN activities, such as health and food programs that have saved millions of lives, weapons monitoring and some peacekeeping missions, in something of a departure from Trump, who has disparaged the United Nations."
Date
January 17, 2017
Title
Trump’s U.N. Nominee to Blast World Body Over Israel: Testimony, Reuters
Original Source
http://mobile.reuters.com/article/idUSKBN15131R
Attachment
Click here to view this article in MS Word/PDF format