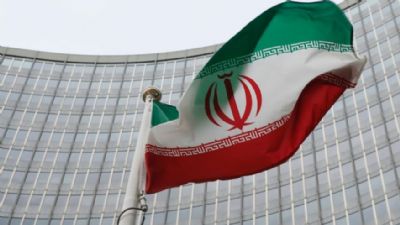 The Iranian flag outside the International Atomic Energy Agency (IAEA) headquarters in Vienna, Austria. (Reuters)
"Expect the Obama administration to take more victory laps this week by claiming Iran has complied with the Joint Comprehensive Plan of Action (JCPOA), the nuclear deal that reaches its first anniversary on July 14. However, recent press reports paint a very different picture, one that confirms its critics' worst fears: massive Iranian violations of the agreement.

In an annual security report issued this month, German intelligence said Iran made a clandestine effort last year to acquire illicit nuclear technology and equipment from German companies at a 'quantitatively high level,' and that 'it is safe to expect that Iran will continue its intensive procurement activities in Germany using clandestine methods to achieve its objectives.' A German intelligence agency reported 141 clandestine Iranian attempts to acquire nuclear and missile technology in 2015 versus 83 in 2013.

According to a July 7 memo from the Institute for Science and International Security, Iran recently tried, unsuccessfully, to covertly purchase tons of high-strength carbon fiber, which it uses to make rotors for uranium enrichment centrifuges. Under the JCPOA, Iran is required to seek approval for such purchases from a JCPOA procurement working group. The Institute said the JCPOA group probably would not have approved this sale, since Iran has enough carbon fiber to replace the rotors of centrifuges it is permitted to operate under the agreement...

As serious as these issues are, the Obama administration is ignoring them, insisting the nuclear deal is a success because Iran has complied with it. The truth is that the JCPOA was negotiated entirely on Iran's terms. As a result, Tehran made easily reversible concessions on its nuclear program that allow it to shorten the timeline to a nuclear bomb while the agreement is in force..."
Date
July 14, 2016
Title
First Anniversary of Iran Nuclear Deal Marred by Massive Cheating, Fox News
Author(s)
Fred Fleitz
Original Source
http://www.foxnews.com/opinion/2016/07/14/first-anniversary-iran-nuclear-deal-marred-by-massive-cheating.html
Attachment
Click here to view this article in MS Word/PDF format