United States taxpayers on hook to the United Nations for approximately $3.024 billion in 2015 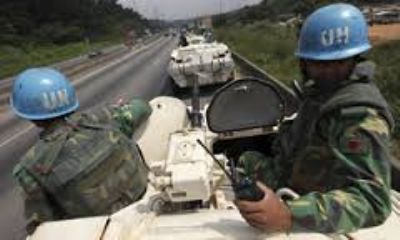 UN peacekeepers largely paid for by US taxpayers.
The United States taxpayers will pay the United Nations approximately $3.024 billion in 2015, according to testimony by Brett Schaefer, a Heritage Foundation fellow, before the Senate Foreign Relations subcommittee responsible for multilateral institutions on May 6, 2015. This total accounts for $621.9 million toward the UN regular budget and $2.402 billion toward the UN peacekeeping budget. In contrast, 35 nations will pay less than a total of $29,000. Schaefer testified that the US' contributions continue to rise due to the UN's runaway budget which increased from nearly $15 billion in 2002 to nearly $41.5 billion in 2012. A major factor behind that increase is the "failure to arrest growth" in UN personnel costs which accounts for 70% of UN spending.

This figure is more than double today's figure, raising the question of what exactly is the true cost of US' membership to the UN.
Date
May 7, 2015
Title
Key Issues of U.S. Concern at the United Nations, Heritage Foundation
Author(s)
Brett Schaefer
Original Source
http://www.heritage.org/research/testimony/2015/key-issues-of-us-concern-at-the-united-nations
Attachment
Click here to view this article in MS Word/PDF format