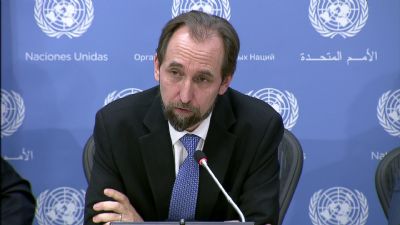 Prince Zeid Raad Zeid al-Hussein
The UN Secretary-General has chosen a replacement for anti-Israel bigot Navi Pillay, the outgoing UN High Commissioner for Human Rights. He is Prince Zeid Ra'ad Zeid al-Hussein, a member of Jordan's royal family and its ambassador to the United Nations. His selection will have to be formally approved by UN states, but he would not have been announced without Ban Ki-moon first receiving assurances he would sail through.

The articles praising the appointment are already coming fast and furious - from those who stand to benefit most in terms of access, power and available grant-money flowing from the UN to cooperative outsiders. The NGO Human Rights Watch tells reporter Colum Lynch: "Prince Zeid's work on sexual violence and his leadership on the international criminal court give a good foundation for this new role," said Peggy Hicks, global advocacy director at Human Rights Watch.

Hicks also says: "As states in his region silence civil society and crush peaceful protests, the real test for Prince Zeid will be his willingness to stand up to abusive governments and speak out for those facing injustice and human rights violations worldwide."

This kind of comment coming from Hicks is predictable in view of her own long history of anti-Israel bias. Because the real test for a Muslim who becomes the UN's top human rights authority, will be his attitude towards the obsessive demonization of Israel and the constant dissemination of antisemitism by the UN human rights system itself. The grotesque double-standards that the UN human rights apparatus applies only to Israel, day after day, constantly impede UN action on real human rights abuses around the world.

So how likely is it that a High Commissioner for Human Rights who comes from a country that is a member of the Organization of Islamic Cooperation - which has hijacked the UN Human Rights Council to serve as its personal Israel-bashing tool - will confront his nation's allies and refuse to become part of the problem?

The answer is, as the British would say, not bloody likely.

"His Royal Highness Prince Al-Hussein of Jordan" represented Jordan before the International Court of Justice when it considered the legality of Israel's security fence in 2004. The case was a farcical "legal" exercise that answered a "question" posed by the General Assembly. The Assembly had already decided the illegality of "the Wall" and gave the Court the information to "prove" the foregone conclusion.

During his appearance Al-Hussein said that Israeli "practices" were "no less horrific" than suicide-bombing.