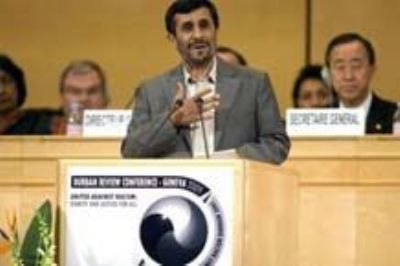 The US, breaking with past precedent of distancing itself from the Durban conference over the anti-Semitism which was endemic to the conference, took the lead together with South Africa and the African regional group, in presenting the statement, which read: 'Recalling the twentieth anniversary of the adoption of the Durban Declaration and Program of Action, we are committed to...address and combat racism, racial discrimination, xenophobia, and related intolerance...'

Anne Bayefsky, director of the Touro Institute on Human Rights and the Holocaust and the NGO Human Rights Voices, criticized the statement and the Biden Administration's decision to invoke the Durban conference 20 years later.

'The Durban Declaration encourages the hatred of Jews. Everyone who was there at its creation (as I was) knows that. Anti-Semites manufacture tools to spread intolerance by manipulating current events, appropriating the history of others, inverting right and wrong,' Bayefsky said.

In December 2020, the UN General Assembly voted to celebrate the 20th anniversary of the original Durban conference in New York in September 2021 at the opening of the annual General Assembly session. Bayefsky called on the US to boycott this 'Durban IV' the way it boycotted 'Durban II' in 2009 and the 10th anniversary celebration at 'Durban' III in 2011.

In a statement also delivered to the UN Human Rights Council, Bayefsky said: 'Durban is such a tool. It perversely claims equality for some can be built on the inequality of the Jewish few â and specifically on the lethal lie that Palestinians are victims of Israeli racism. Actually, it is Palestinian Arabs who reject peaceful cohabitation with Jews, clamor for an 'apartheid Palestine,' and foment genocide against Jews in word and in deed. Durban I, and Durban II and III commemorations, were all celebrated by notorious anti-Semites, like Iran's Ahmadinejad, because of the Durban lie. So here we are again. Durban IV. Germany with its history of anti-Semitic horrors, France and its appeasement of Jew hatred, Britain which recently harbored antisemitism in its political heartland, the United States, Canada, Australia, the Netherlands, Czech Republic, Austria, Poland...now all face a choice of the UN's making. Durban IV is one more attempt to turn the fight against racism into a fight against Jews. It needs to be shunned. Not celebrated or commemorated. Not fully implemented or reaffirmed. To combat racism: stay away.'"
Date
March 24, 2021
Title
‘Durban IV is another attempt to turn fight against racism against Jews’, Arutz Sheva
Author(s)
Gary Willig
Original Source
https://www.israelnationalnews.com/News/News.aspx/299164
Attachment
Click here to view this article in MS Word/PDF format