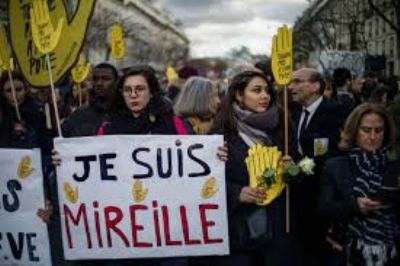 French protesters after the murder of 85-year old Holocaust survivor Mireille Knoll, March 2018
"More than 300 political leaders, intellectuals and celebrities have signed a manifesto claiming that French Jews have fallen victim to a form of ethnic cleansing perpetrated by radical Islamists, amid the indifference of the country's elite.

Nicolas Sarkozy, the former president, Manuel Valls, the former prime minister, Charles Aznavour, the singer, and GÃ©rard Depardieu, the actor, are among those who have thrown their weight behind the document.

It says that France has become 'the theatre of murderous antisemitism' with 11 Jews having been 'assassinated' because of their religion since 2006.

'French Jews are 25 times more at risk of being attacked than their Muslim counterparts,' it adds. 'Ten per cent of the Jewish citizens of the Paris region . . . have recently been forced to move because they were no longer secure in certain council estates. This is a quiet ethnic cleansing.'

France has Europe's biggest Jewish community, with more than 500,000 people, and the biggest Muslim population, with about eight million people. More than 3,300 Jews left France for Israel last year, more than from any other western country...

In a denunciation reminiscent of the criticism facing Jeremy Corbyn in Britain, the manifesto claims that historical far-right French antisemitism has been joined by that 'of a part of the radical left which has found in anti-Zionism an alibi for transforming the executioners of the Jews into the victims of society'...

The 11 Jewish victims referred to in the text are a 23-year-old mobile telephone salesman tortured and killed by a gang of youths in 2006; a rabbi and three children shot by an Islamist in 2012; four shoppers murdered in a jihadist attack on a kosher store in 2015; a 65-year-old woman thrown out of her flat window last year; and an 85-year-old Holocaust survivor who was stabbed in her Paris flat last month."
Date
April 23, 2018
Title
French Jews ‘face ethnic cleansing by Islamists’, The Times UK
Author(s)
Adam Sage
Original Source
https://www.thetimes.co.uk/edition/world/french-jews-face-ethnic-cleansing-by-islamists-sqbfgqq32?_ga=2.215788375.1560912448.1524574917-960049969.1524574917
Attachment
Click here to view this article in MS Word/PDF format