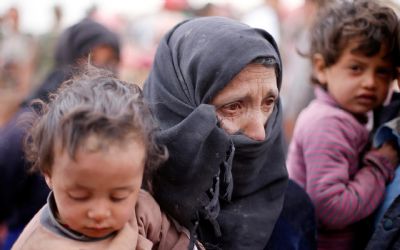 Syrian refugees
"Women in refugee camps in Syria have been forced to offer sexual favours in return for aid from the United Nations, a report has found, in the latest accusation to hit the sector.

Aid workers would allegedly regularly harass and abuse women and girls trying to access humanitarian assistance in the war-torn country, to the point that some stopped asking.

Some victims were allegedly forced to marry locally-hired officials working for the UN and other international charities for 'sexual services' in order to receive meals.

The allegations have been published by the United Nations Population Fund (UNFPA), which conducted an assessment of gender-based violence in the region last year and concluded that aid was being exchanged for sex.

The UN had been warned of such activity three years before, but the report suggests the abuse was continuing until at least late 2017...

UN programmes are already viewed with deep suspicion by many in Syria.

The world body has been accused of lacking impartiality in the conflict, effectively allowing President Bashar al-Assad to dictate where aid goes in the country.

In 2016, more than 70 aid groups suspended cooperation with the UN in Syria and demanded an investigation into its operations because of concerns the government was preventing assistance from reaching rebel-held areas."
Date
February 27, 2018
Title
Women in Syria ‘forced to exchange sexual favours’ for UN aid, The Daily Telegraph
Author(s)
Josie Ensor
Original Source
https://www.telegraph.co.uk/news/2018/02/27/women-syria-forced-exchange-sexual-favours-un-aid/
Attachment
Click here to view this article in MS Word/PDF format