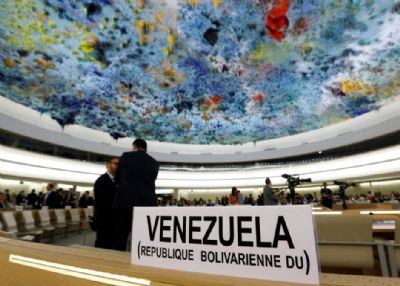 The seat for Venezuela at the UN Human Rights Council (File photo)
"Australia's election to membership of the controversial, 47-nation UN Human Rights Council is a significant success for Foreign Minister Julie Bishop and the protracted global campaign waged by our diplomats to win the seat. There should be no illusion about the challenge we face, however, in achieving what Ms Bishop has rightly identified as one of our main goals in joining: achieving long-overdue reform of a body whose hypocritically pontificating membership includes some of the world's most egregious human rights abusers, ever ready to point fingers at others. States such as Venezuela, Cuba, Saudi Arabia, China and Egypt have helped ensure, as US ambassador to the UN Nikki Haley has pointed out, the council's focus is perpetually on denouncing the purported human rights depredations of one country, Israel. At the same time, the council has been far less concerned about atrocities such as the bloodbaths in Syria and Yemen and the plight of Myanmar's Rohingya minority.

Paradoxically, coinciding with Australia's election, the Trump administration is preparing to quit the UNHRC following its decision last week to abandon membership of the Paris-based UNESCO, one of the UN's biggest and most important agencies. The reasoning in both instances is that neither UN body is doing its job and is fixated by 'anti-Israel bias'.

Given the line-up of countries elected or re-elected to a three-year term alongside Australia, there is, short of genuine reform, unlikely to be any amelioration of the council's bias. Among those countries is Pakistan, notorious for double-dealing with Islamist terrorists and using military courts to carry out hundreds of executions. The Democratic Republic of Congo, which also won a seat, has seen thousands of its people killed in the Kasai region in the past year. Ironically, it is under investigation by the UNHRC for human rights abuses..."
Date
October 17, 2017
Title
UN human rights reform vital, The Australian
Author(s)
Editorial Board
Original Source
http://www.theaustralian.com.au/opinion/editorials/un-human-rights-reform-vital/news-story/5d505c16bbca58c20b4dfd5e741d4b81
Attachment
Click here to view this article in MS Word/PDF format