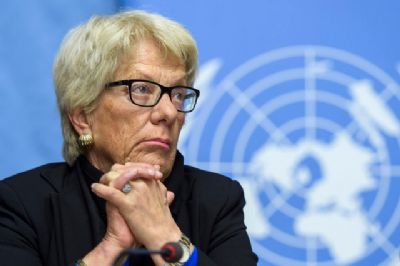 Del Ponte, an accomplished war crimes prosecutor, announced last month that she was leaving the Commission of Inquiry (COI) on Syria, a UN-backed panel that has collected evidence of alleged atrocities committed in the country since the outbreak of civil war in 2011.

'I resign to put an end to my frustration,' Del Ponte told the Human Rights Council, after the COI presented its latest report.

'Seven years of crimes in Syria and total impunity. That is not acceptable'...

She said that when she joined the COI she did not anticipate that the international community would fail to set up a court capable of trying crimes committed in Syria. The commission has repeatedly urged the United Nations Security Council to refer Syria to the International Criminal Court, an effort that has been blocked by the Damascus regime's ally Russia...

Its most recent report, submitted to the rights council on Monday, charged Damascus with carrying out a chemical attack which killed dozens of people in Khan Sheikhun in April.

A new UN body -- called the International, Impartial and Independent Mechanism -- has recently started work in Geneva with a mandate to prepare cases against specific individuals.

Del Ponte called that effort 'a little step towards justice'.

But the mechanism's chief, Catherine Marchi-Uhel of France, cautioned earlier this month that her office was not a court and had no power to bring international charges."
Date
September 18, 2017
Title
Syria war crimes investigator blasts impunity in farewell speech, The Daily Mail
Author(s)
AFP
Original Source
http://www.dailymail.co.uk/wires/afp/article-4896262/Syria-war-crimes-investigator-blasts-impunity-farewell-speech.html
Attachment
Click here to view this article in MS Word/PDF format