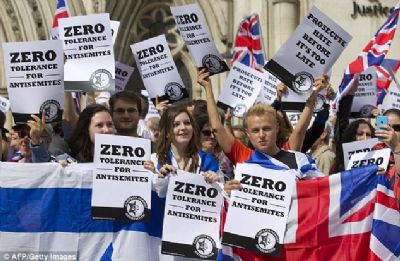 "Anti-Semitic crime has risen to its highest level in the United Kingdom, according to a new audit released by the Campaign Against Antisemitism.

According to the National Antisemitic Crime Audit released on Sunday, anti-Semitic crime in 2016 rose 44 percent from 2014.

Anti-Semitic crime has already been a factor in the initial months of 2017, with incidents including the firebombing of kosher restaurants in Manchester, a man stopped by police after chasing Jews in London brandishing a meat cleaver and machete, and police closing down London streets to make way for a major pro-Hezbollah march..."
Date
July 16, 2017
Title
Anti-Semitic Crime At Highest Recorded Level In British History, Study Finds, The Forward
Author(s)
JTA
Original Source
http://forward.com/fast-forward/377136/anti-semitic-crime-at-highest-recorded-level-in-british-history-study-finds/
Attachment
Click here to view this article in MS Word/PDF format