Delegitimization of Israel Courtesy of the UN "Human Rights" Council: "Nakba since 1917" 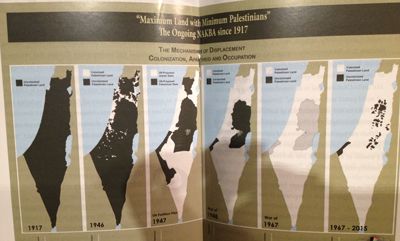 On March 17, the Badil Resource Center for Palestinian Rights, held an informal meeting entitled "Israel's forcible transfer of Palestinians inside the occupied Palestinian territory". Badil distributed at the meeting material containing a series of maps titled :"Maximum Land with Minimum Palestinians: The Ongoing NAKBA Since 1917- The Mechanism of Displacement Colonization, Apartheid and Occupation"