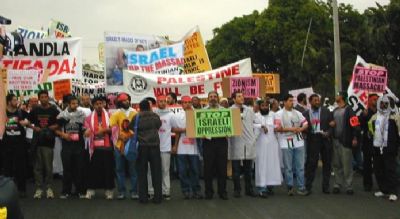 A demonstration at the Durban Conference in 2001
"Australia will not participate in the 20th anniversary events for the World Conference Against Racism in Durban, in which Israel was singled out for opprobrium, Australian Prime Minister Scott Morrison said on Thursday.

'We will not associate Australia with one-sided and contentious language that singles out Israel or [with] an event that champions such language,' Morrison said at an event of the Australia-Israel Chamber of Commerce in Melbourne. 'This is entirely consistent with my government's very strong voting position on UN General Assembly resolutions, in the Human Rights Council and elsewhere. We will continue that same approach to Durban IV later this year.'

In October 2020, Australia's representative told the UN Human Rights Council that Canberra "does not support the Durban Declaration and Program of Action. It represents a missed opportunity. Instead of achieving a consensus document, which could be embraced by all states â the kind of consensus document befitting such an important cause as fighting racism â the World Conference Against Racism, and the subsequent Durban Review Conference, were misused by a handful of states to serve an anti-Israel agenda. The Durban Declaration is tainted by this unconscionable bias.

'Racism is a problem throughout the world and yet Israel is the only country mentioned in the Program of Action,' Australia's statement read. 'Singling out Israel in this way is not helpful, and does nothing to achieve the Durban Declaration's goals. Countries with serious cases to answer are able to avoid accountability and reform for as long as Israel is solely targeted.'

The 2001 World Conference against Racism, also known as Durban I after the South African city where it took place, was a hotbed of antisemitic and anti-Israel messages, and is thought to be start of anti-Israel activists using the accusation of apartheid against the Jewish state.

The NGO Forum at Durban approved a resolution calling Israel a 'racist apartheid state' and accusing it of genocide. Antisemitic materials, such as The Protocols of the Elders of Zion, were distributed at the event. Durban Conference secretary-general Mary Robinson refused to accept the document because of the language, saying 'there was horrible antisemitism present.'

The Zionist Federation of Australia welcomed the decision to boycott Durban IV.

ZFA president Jeremy Leibler said, the decision 'continues [Morrison's] government's principled position of refusing to cooperate with the UN's anti-Israel resolutions and activities... Racism must be fought, and international events to highlight racism are important. But the Durban process was infected by antisemitism, which undermined its raison d'Ãªtre.'

Australia is the second country to announce it has officially withdrawn from Durban IV, after a US State Department spokesperson told The Jerusalem Post earlier this week that it would not take part in the event scheduled for September 22 in New York.

"The United States will not attend or participate in any events commemorating the 20th anniversary of the Durban Declaration and Program of Action or the World Conference on Racism, which preceded it," the State Department spokesperson stated on Monday. 'The United States stands with Israel and has always shared its concerns over the Durban process's anti-Israel sentiment, use as a forum for antisemitism and freedom of expression issues.'

France is expected to pull out from the conference, as well, a diplomatic source said, but has not put out an official statement yet. Several other countries that boycotted the previous two Durban review conferences, including Canada, have yet to respond to queries from the Post on the matter.

Responding to a Parliamentary Question from Baroness Deech last Month, UK Minister of State for the Commonwealth and UN Lord Ahmad of Wimbledon noted 'the antisemitic actions and speeches in and around' Durban III, and said the UK is will consider its attendance at Durban IV in light of developments between now and September, to gauge how likely the conference is to host antisemitism again.

The German Embassy in Israel said that a decision will be announced closer to the conference. Germany did not attend past conferences.

The US did not participate in the Durban II and III follow-up conferences in 2009 and 2011, respectively, because, as then-US president Barack Obama explained in 2009, the original conference 'became a session through which folks expressed antagonism toward Israel in ways that were oftentimes completely hypocritical and counterproductive.' Israel, Canada, Italy, Australia, Germany, the Netherlands, New Zealand and Poland also boycotted the conference. In 2011, for Durban III, the number of countries boycotting rose to 14."
Date
May 6, 2021
Title
Australia won’t go to anti-Israel Durban Conference, prime minister says, Jerusalem Post
Author(s)
Lahav Harkov
Original Source
https://www.jpost.com/israel-news/australia-wont-go-to-anti-israel-durban-conference-prime-minister-says-667407
Attachment
Click here to view this article in MS Word/PDF format