Hizballah's Terror Army: How to Prevent a Third Lebanon War - An Assessment by the High Level Military Group 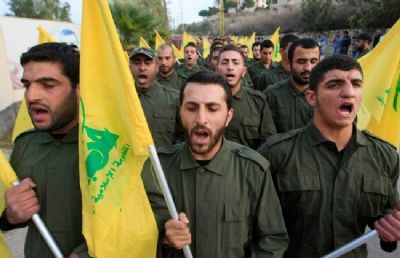 Hezbollah fighters
"For the longest period of time, when talking about war, we were talking about the Western way of war as essentially described by Clausewitz: the goals and policy of a state, an army fighting to achieve political goals, and a population supporting the war effort against the enemy. But this classical view of warfare is gone: it now belongs to the past. Unfortunately, the strategic community has not yet found an accepted alternative vision. The reasons are obvious: it is not only states who have found new ways of waging war, such as Russia in Ukraine, but nonstate actors have grown exponentially in relevance, and can today conduct military operations against regular armies, as the Islamic State does in Syria. Concepts such as hybrid warfare, asymmetric warfare, 4th generation warfare and a few others have all tried to capture the new forms of current wars, from Chechnya to Gaza, from Afghanistan to Syria.

The High Level Military Group was born in 2015 to assess the conduct of the Israeli Defense Force (IDF) during Operation Protective Edge in Gaza. Despite the many specific conditions of that limited conflict, multiple relevant factors were present which could affect future operations of other Western armies: How irregular militias might operate when they are religiously motivated; how the Law of Armed Conflict (LOAC) is not respected by terrorist adversaries, particularly in regard to the separation of combatants from civilians and how our forces should be prepared to deal with the use of human shields and enemies that protect themselves by operating from civilian infrastructure. Similarly, the conflict illustrated how to fight not only in heavily populated areas, but on a multi-dimensional battlefield, horizontal, vertical and underground; and how to fight both in cyberspace and through social networks.

In order to understand how the IDF behaved and performed during the war in Gaza, the HLMG developed a highly sophisticated methodology, setting appropriate accurate standards resulting in our ability to compare the IDF with other military campaigns conducted by other armies over time. Thus, a second volume produced a comparison of national cases, ranging from Colombia and the FARC to Australian forces in the battle for Fallujah, to mention only two of the cases investigated.

Even so, the real nature of modern conflicts was still relatively elusive. An additional 'Home Front' component devoted some time to studying the stabbing and car ramming terrorist campaign in Israel to not only better understand an emerging severe new problem, as we now know all too well in other Western countries, but also to better integrate in the developing vision of modern warfare this low but persistent level of violence and attacks in our own countries. There was and remains a direct connection between what is happening in Raqqa and the litany of terrorist attacks in Europe. These attacks are warfare by other means.

Perhaps there is no better case to explore the transformation of warfare than the new subject of study for the HLMG, Hizballah. The Lebanese group created by Iran is the epitome of what a terror army can be. Hizballah is a sort of state inside the Lebanese state, accumulating more rockets than many European armies. But it is an irregular army since terrorist tactics are commonly employed, and terror as a strategic weapon is used without restraint.

Hizballah has the political clout of a government, the firepower of an army and the strategic approach of a terrorist organization. ThatÂ´s why the group presents such a threat to the Lebanese State, other populations in the region (as seen in Syria), and to Israel. Indeed, its threat extends to the Western world in general, given the proven global reach of Hizballah.

The last war between Hizballah and Israel in 2006 was a severe blow to the terrorist group. But since then, Hizballah has been able to recover militarily, amassing a huge stockpile of weapons, developing and fielding new and more precise and lethal systems, and gaining combat experience fighting for Iran and Bashar al Assad in Syria. There is nothing predetermined in strategic life, but the new configuration of forces in the region could lead to a new war that, because of the regional dynamics and new security imperatives, will be much more violent and destructive than the previous ones. The HLMG thus presents this new report not only in seeking to understand how such a war may erupt and be conducted, but to urge Western leaders that such a conflict can and should be prevented by implementing the right policies vis-a-vis Hizballah and Lebanon..."
Date
October 2017
Title
Hizballah’s Terror Army: How to Prevent a Third Lebanon War: An Assessment by the High Level Military Group
Original Source
http://www.high-level-military-group.org/pdf/hlmg-hizballahs-terror-army.pdf
Attachment
Click here to view this document in MS Word/PDF format