UN Report: "Religious Fanaticism Does Not Exist in Saudi Arabia" 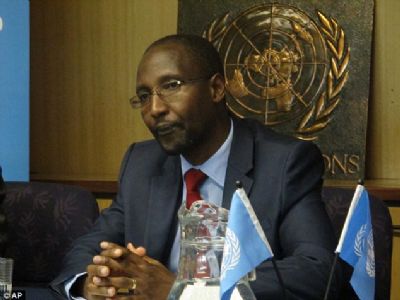 UN Special Rapporteur Mutuma Ruteere, whose report to the UN General Assembly contained the claim that no religious fanaticism exists in Saudi Arabia (File photo)
Saudi Arabia has reassured the United Nations that religious fanaticism "does not exist...in any form" in its country. The statement is found in a new report to the UN General Assembly produced by the UN's Special Rapporteur or expert on "racism, racial discrimination, xenophobia and related intolerance." The report of Mutuma Ruteere, who is from Kenya, is dated August 4, 2017.

The Saudis sent a communication to be included in Ruteere's report, which also includes this Saudi self-analysis: "religious fanaticism does not exist in Saudi Arabia in any form, nor is any minority made to suffer from harassment." The patently false claim is simply reproduced and left unchallenged in the new UN report. The UN expert instead responded: "[t]he Special Rapporteur wishes to thank all those who contributed to the present report" - including Saudi Arabia.

Actually, according to Freedom House's latest 2017 report on the country, "Islam is the official religion, and all Saudis are required by law to be Muslims. A 2014 royal decree punishes atheism with up to 20 years in prison. The government prohibits the public practice of any religion other than Islam and restricts the religious practices of the Shiite and Sufi Muslim minority sects." Moreover, 15 of the 19 terrorists on 9/11 were Saudis, and as of December 2016 more than 2,000 Saudis were fighting abroad with terrorist organizations.