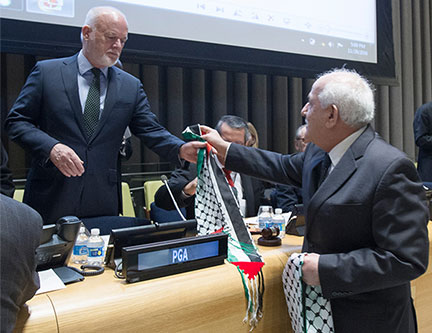 Then UN General Assembly President Peter Thomson (Fiji) (left) being handed a Palestinian scarf by Palestinian UN representative Riyad Mansour (right) at the 2016 International Day of Solidarity with the Palestinian People
The Committee on the Exercise of the Inalienable Rights of the Palestinian People (CEIRPP), the UN committee created to implement the 1975 UN Zionism-is-racism resolution and dedicated to the demonization of Israel, met to lay out a plan to advance the isolation of the Jewish state during the fall session of the UN General Assembly. Speaking at the meeting held at UN Headquarters on September 6, 2017, the Chair of the CEIRPP laid out the steps of the Palestinian scheme: During the September 6 meeting, the CEIRPP also adopted a draft of its annual report for submission to the UN General Assembly. The report further promotes the Palestinian attempt to delegitimize the very establishment of the State of Israel: "Recalling the upcoming 70th anniversary of the expulsion of Palestine refugees from their homeland in 1948, remembered as the 'Nakba' (catastrophe), the Committee emphasizes the importance of acknowledgement of this event and its impact upon the Palestinian people... It strongly advocates for the right of return..." The 800,000 Jewish refugees from Arab lands are not mentioned.

The report also includes direct support for BDS - the boycott, divestment and sanctions campaign to destroy Israel through economic isolation. It encourages the UN to produce a blacklist (euphemistically referred to as a "database") of companies engaged, directly or indirectly in business in any Arab-claimed land. In its words: "The Committee underscores the responsibility of States and private entities not to contribute to grave violations of Palestinian human rights, particularly in respect of settlements... It looks forward to the establishment of a database of all actors conducting business in areas under Israeli military occupation..."

The report notes that the CEIRPP will continue "to generate heightened international awareness on the question of Palestine," requests continued support from the UN's Division on Palestinian Rights, and requests the continuation of the UN Division of Public Information's special information programme on the "question of Palestine."