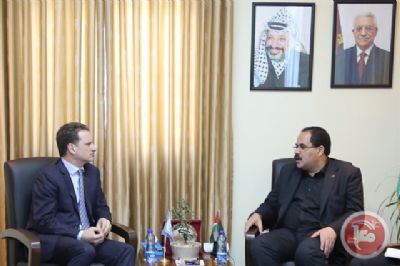 Commissioner-General of UNRWA Pierre KrÃ¤henbÃ¼hl and Palestinian Minister of Education and Higher Education Sabri Saydam
"Recently, UNRWA floated the idea that it would modify the curricula of Palestinian Arab students to slightly reduce bias against Israelis and Israel. As I noted previously, some of the proposed changes (actually addenda that teachers could use to supplement textbooks) to Grades 1-4 textbooks leaked in Arab media included:

* Removing maps of 'Palestine' that include all of Israel

* Replacing the phrase 'Jerusalem is the capital of the Palestinian state' with the words 'Jerusalem is a holy city for all Abrahamic religions'...

The Palestinian Authority education ministry responded by cutting off contact with UNRWA.

As I predicted, UNRWA has caved:

'The Commissioner-General of the United Nations Relief and Works Agency UNRWA Pierre KrÃ¤henbÃ¼hl reiterated the full commitment of the agency to the Palestinian curriculum and emphasized that no change may affect these curricula.

This came during a meeting this afternoon with the Minister of Education and Higher Education Dr. Sabri Saydam...'

This is a violation of UNRWA's own stated educational principles of creating students who are 'tolerant and open minded, upholding human values and religious tolerance.'

It is also a violation of the UN Charter which UNRWA is obligated to uphold in its mandate. The UN Charter includes the obligation 'to develop friendly relations among nations based on respect for the principle of equal rights and self-determination of peoples, and to take other appropriate measures to strengthen universal peace.'..."
Date
April 19, 2017
Title
UNRWA Agrees to Violate UN Charter and Keep Teaching Israel Doesn’t Exist (UPDATE), Elder of Ziyon
Original Source
http://elderofziyon.blogspot.com/2017/04/unrwa-agrees-to-violate-un-charter-and.html
Attachment
Click here to view this article in MS Word/PDF format