Trump Copies Obama's Routine of Boycotting One Day of Human Rights Council, Then Right Back On 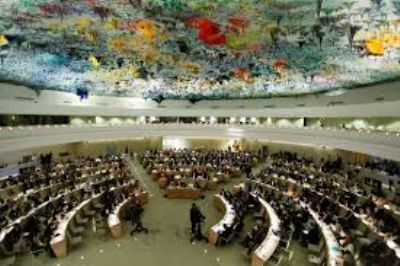 The UNHRC, which includes member countries cited for mass human rights abuses, is poised on Monday to [consider] five anti-Israel resolutions, prompting outrage in the Trump administration over what officials described as the council's unjust bias against the Jewish state.

The action on these items has prompted the Trump administration to boycott the council and refuse to attend the Monday meeting, according to administration officials apprised of the situation who spoke with the Free Beacon...

'The argument that the U.S. has to participate in bodies like the United Nations Human Rights Council or risk losing our influence over it is ridiculous,' said one senior administration official familiar with the boycott. 'The UNHRC is, like its predecessor, morally bankrupt and the only good news is that its actions have little practical effect in the real world. We've wasted enough time and money on it.'

The declaration signals a vast departure from the Obama administration, which, in its final days in office, helped craft and garner support for a fiercely anti-Israel resolution. The Obama administration's efforts, which were widely condemned by Israel and U.S. pro-Israel groups, broke with decades of U.S. policy when it promoted this effort..."
Date
March 20, 2017
Title
Trump Admin To Boycott U.N. Council Over Anti-Israel Agenda, The Washington Free Beacon
Author(s)
Adam Kredo
Original Source
http://freebeacon.com/national-security/trump-admin-to-boycott-u-n-council-over-anti-israel-agenda/
Attachment
Click here to view this article in MS Word/PDF format