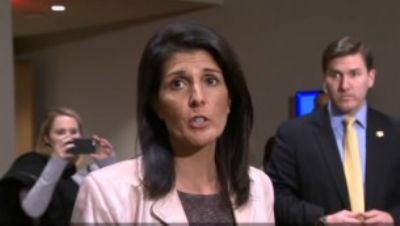 US Ambassador to the United Nations Nikki Haley, January 31, 2017
"Washington's new UN envoy Nikki Haley is putting in motion a far-reaching review of UN peacekeeping that is likely to lead to closures and downsizing of missions, according to diplomats.

Haley took up her post with a vow to overhaul the United Nations and 'do away' with what she termed 'obsolete' activities amid fresh clamor in Washington over US funding for the world body.

During one-on-one meetings with Security Council ambassadors this week, the new US envoy raised peacekeeping as a priority for cuts, zeroing in on the UN's flagship enterprise, according to three diplomats with knowledge of the discussions.

Haley is setting up a mission-by-mission review of all 16 peace operations and is 'relatively skeptical' of the value and efficiency of many of the blue-helmet deployments, said the diplomat, who spoke on background.

While the United States has few soldiers serving as peacekeepers, it is by far the biggest financial contributor to UN peacekeeping, providing nearly 29 percent of the $7.9 billion budget for this year."
Date
February 5, 2017
Title
US Envoy Haley Looks to Slash UN Peacekeeping, The Times of Israel
Author(s)
AFP
Original Source
http://www.timesofisrael.com/liveblog_entry/us-envoy-haley-looks-to-slash-un-peacekeeping/
Attachment
Click here to view this article in MS Word/PDF format