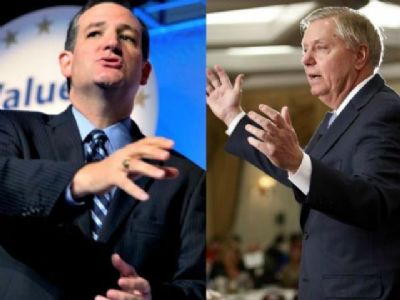 'What brings us together today is an issue that I think really unites Republicans but also unites Americans, and that's standing with Israel,' Cruz told Fox News' 'Fox and Friends' program. 'If you look in the last month what [President] Barack Obama has done, I think it's been nothing short of shameful. It has been striking out against Israel, really showing his true beliefs.'

Cruz said he and Graham will file their legislation to defund the U.N. on Thursday, and hope to 'end it all unless and until they reverse this anti-Israel resolution.'

Also appearing on MSNBC's 'Morning Joe' program, Graham noted that 22 percent of the money for the United Nations comes from the American taxpayers, and he does not think 'It's a good investment for an American taxpayer to give money to an organization that condemns the only democracy in the Mideast, takes the settlement issue and says that's the most important and only issue in term of impediments to peace.'

The United States abstained from the vote, he pointed out, which amounted to Secretary of State John Kerry and Obama 'taking a slap at Israel,' he said.

'We're going to push back,' Graham told the program. 'I think most Americans believe that the United Nations has become more anti-Semitic and we're going to stop the money until we get this fixed. I appreciate Ted's leadership on this.'..."
Date
January 12, 2017
Title
Cruz, Graham Join Forces to Defund United Nations, Newsmax
Author(s)
Sandy Fitzgerald
Original Source
http://www.newsmax.com/Newsfront/Ted-Cruz-Lindsey-Graham-Defund-UN/2017/01/12/id/768206/
Attachment
Click here to view this article in MS Word/PDF format