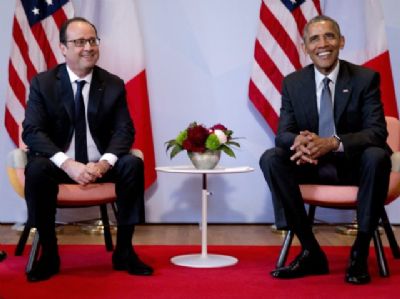 On January 15, 2017, with only five days left after 2,917 days in office, President Barack Obama is planning once again to feed Israel to the international wolves. The move is intended to tie the hands of President Donald Trump and is a direct repudiation of the will of the American electorate who rejected Obama's calamitous foreign policy and a repeat performance by his secretary of state.

On Sunday, France is scheduled to hold an international conference to unleash an international mob on Israel. The meeting is taking place with Obama's direct connivance. Seventy-states have been lined up to impose their preferences on the Middle East's only democracy. Israelis are still dying in Israeli streets after seventy years of unending Arab terror â and the folks sitting in Paris munching on croissants know best how to protect Israeli national security.

The bare-faced power-grab by France and its Arab allies â with the blessing of President Obama â raises unavoidable questions: Who will attend? If they attend, how senior a representative will be sent by the main players on the Security Council: the U.S., Russia, and the United Kingdom? Will attendees sign on to an outcome document imperiling Israel that is already circulating? Will the Middle East Quartet â composed of the U.S., the EU, Russia and the UN â approve of the outcome document? Will a UN Security Council subsequently approve of the outcome document before January 20, 2017?

The French meeting follows on President Obama helping to ram through a UN Security Council resolution on December 23, 2016 that was clearly intended to unleash a legal and economic pogrom against the Jewish state. It didn't take long for Palestinian terrorists to get the message: sidelining a negotiated solution between the parties by strong-arming an Israeli villain at the UN was a greenlight for the enforcers in Gaza City and Ramallah.

President Obama's collusion on round-two jettisons decades of bipartisan policy prioritizing a negotiated path to Arab-Israeli peace, and flies in the face of overwhelming bipartisan opposition in Congress reconfirmed by the House just last week. Since the point of this flurry of international activity by UN-firsters is to scuttle and deny President Trump's foreign policy remit, would-be participants in the French mugging of the Jewish state need to know â now â what they should expect five days later on January 20, 2017.

UK Prime Minister Theresa May has already made calls to the incoming team and expects to be high-up on the list of early visitors welcomed to the White House in the spring. EU countries will similarly come asking for help easing post-Brexit fallout, tackling refugee problems, and buttressing security needs. The Middle East Quartet is desperate to continue its role supervising the Arab-Israeli conflict and to avoid a return to sole American custody. The UN is an economic ward of the United States â to the tune of upwards of 10 billion a year â currently parked in the middle of a place many diplomats prefer to home.

So here are some suggestions that may be communicated to those interested in a productive relationship with the man in office five days later and his colleagues now in charge of the purse strings on Capitol Hill â if the French refuse at their peril to postpone it altogether: As for the UN, there is only one subject that UN-firsters understand and it isn't a Congressional memo begging the institution to treat Israel better the next time. A promise to insist on an immediate halt of the transfer of funds to the UN pending a thorough accounting of expenditures and a strategic review of the US-UN relationship, would be a good start.

The rogue in the White House is poised to derail any prospect of Arab-Israeli peace in the foreseeable future, further endanger Israel's security and the country's ability to safeguard Jewish identity. If his co-conspirators believe it will be cost-free, expect the onslaught to proceed as planned.