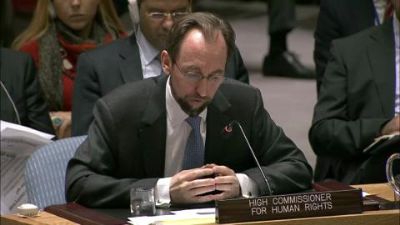 'If [Trump] puts any of those ghastly campaign pledges into action we will condemn,' a U.N. official declared... It was necessary to call out the U.S. to set an example for other smaller member states, the officials said.

Hussein publicly chastised Trump throughout the 2016 campaign, telling reporters Trump's rhetoric is 'deeply unsettling and disturbing to me.' Hussein even compared Trump's campaign style to that of ISIS propaganda saying his 'use of half-truths and oversimplification, the propaganda of Daesh uses tactics similar to those of the populists.' He went so far as to declare that Trump's election would be 'dangerous from an international point of view.'

While Hussein served as Jordan's Ambassador to the U.N. he voted in favor of resolutions that would criminalize blasphemy. Blasphemy laws in the Islamic countries are frequently used to target critics of the Muslim faith, including 2006 Danish cartoons which depicted the Prophet Muhammed. Jordan itself convicted the Danish cartooners in absentia in 2011."
Date
November 23, 2016
Title
Arab Prince Gets Ready To Lecture Trump About Human Rights, The Daily Caller
Author(s)
Saagar Enjeti
Original Source
http://dailycaller.com/2016/11/23/arab-prince-gets-ready-to-lecture-trump-about-human-rights/
Attachment
Click here to view this article in MS Word/PDF format