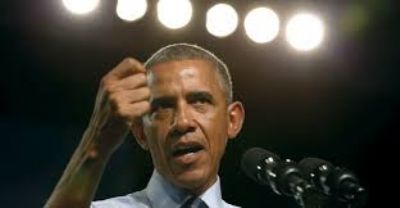 President Barack Obama
"Newly obtained documents show the Obama administration negotiated a secret side agreement with Iran that removes key restrictions on its nuclear procurement efforts after a decade, paving the way for Tehran to build functional nuclear weapons within six months of the restrictions being lifted.

The terms of this arrangement undermine the credibility of the nuclear deal and call into question claims by top administration officials who promised lawmakers that the deal would block the Islamic Republic's pathway to a bomb.

Rep. Peter Roskam (R., Ill.), a leading critic of the deal who has spearheaded efforts to block U.S. institutions from engaging with Iran, told the Free Beacon that the Obama administration had 'not told lawmakers' about its secret negotiations with Iran.

'Of course the administration has not told lawmakers this and of course it's sadly predicable,' Roskam told the Free Beacon on the sidelines of the GOP convention in Cleveland on Tuesday. 'There's no celebration in the fact that the administration has gotten this [deal] wrong at conceivably every level. It is severe news and it has to be dealt with.'

'I don't think there's a way to have the nuclear deal actually limit Iran,' Roskam said. 'I think it's a false premise. I don't think that the architecture is there for that.'..."
Date
July 20, 2016
Title
Obama Admin Kept Lawmakers in Dark About Secret Iran Side Deals, The Washington Free Beacon
Author(s)
Adam Kredo
Original Source
http://freebeacon.com/national-security/obama-admin-kept-lawmakers-dark-secret-iran-side-deals/
Attachment
Click here to view this article in MS Word/PDF format