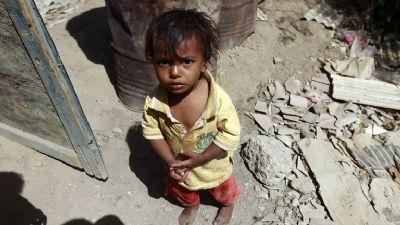 A Yemeni child stands outside the family house which was destroyed in an air-strike by the Saudi-led coalition at a slum in the capital Sanaa, on March 12, 2016. (AFP / MOHAMMED HUWAIS)
"Saudi Arabia threatened this week to break relations with the United Nations and cut hundreds of millions of dollars in assistance to its humanitarian relief and counterterrorism programs to strong-arm the U.N. into removing Riyadh and its allies from a blacklist of groups that are accused of harming children in armed conflict.

The threat - which has not been previously reported - worked, and the U.N. subsequently dropped the Saudis from a rogues' gallery of the world's worst violators of children's rights in conflict zones.

In their Monday warning, senior Saudi diplomats told top U.N. officials Riyadh would use its influence to convince other Arab governments and the Organization of Islamic Cooperation to sever ties with the United Nations, the officials said. The threats were issued in a series of exchanges between top Saudi officials in Riyadh, including Saudi Foreign Minister Adel al-Jubeir, according to U.N.-based officials. The Saudi mission to the United Nations did not respond to a request for comment Tuesday afternoon.

Riyadh was enraged after U.N. Secretary-General Ban Ki-moon included the Saudi-led military coalition in Yemen on a list of countries, rebel movements, and terrorist organizations that killed, maimed, or otherwise abused children in conflict. The 40-page report - which was issued last week and primarily written by Leila Zerrougui, the U.N. chief's special representative for children and armed conflict - claimed the coalition was responsible for about 60 percent of 1,953 child deaths and injuries in Yemen since last year.

Hoping to mollify the Saudis, Ban issued a statement Monday saying he would remove the Saudi-led coalition from the list, pending a review of the matter by a joint U.N. and Saudi panel. The reversal triggered a wave of criticism of the U.N. from human rights groups, who accused Ban of caving to Saudi intimidation..."
Date
June 8, 2016
Title
Saudi Arabia Threatened to Break Relations With U.N. Over Human Rights Criticism in Yemen, Foreign Policy
Author(s)
Colum Lynch
Original Source
http://foreignpolicy.com/2016/06/07/saudi-arabia-threatened-to-break-relations-with-un-over-human-rights-criticism-in-yemen/
Attachment
Click here to view this article in MS Word/PDF format