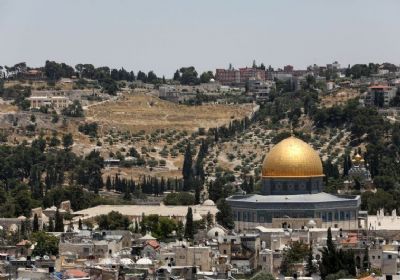 The Old City of Jerusalem and Temple Mount area
"UNESCO's Executive Board in Paris on Friday adopted a resolution whose language ignores Jewish ties to its holy religious site of the Temple Mount and the Western Wall area in Jerusalem's Old City.

The broad-ranging resolution condemns Israeli actions in east Jerusalem, the West Bank and the Gaza Strip but focus in large part on Israeli actions with regard to the Temple Mount and Western Wall Plaza.

In October, the United Nations Educational, Scientific and Cultural Organization backed away from reclassifying the Western Wall as solely a Muslim holy site, but is now using language that almost solely refers to it as such...

'UNESCO ignores the unique Jewish connection to the Temple Mount, the site of two temples for 1,000 years, and the place to which Jews prayed for thousands of years,' he said in a statement Saturday night. 'The UN is rewriting a basic part of human history and proving that there is no low to which it will not reach.'..."
Date
April 15, 2016
Title
UNESCO Adopts Resolution Ignoring Jewish Ties to Temple Mount, The Jerusalem Post
Author(s)
Tovah Lazaroff
Original Source
http://www.jpost.com/Arab-Israeli-Conflict/UNESCO-adopts-resolution-ignoring-Jewish-ties-to-Temple-Mount-451346
Attachment
Click here to view this article in MS Word/PDF format