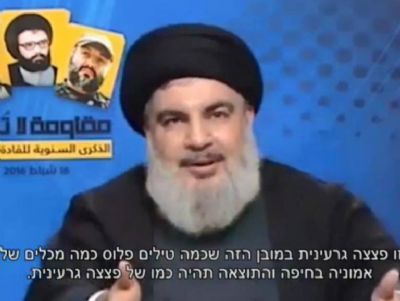 I am writing to draw your attention to the outrageous threats made by the head of Hezbollah, an internationally designated terrorist organization.

Yesterday, in an open public statement, Hassan Nasrallah, the Secretary General of Hezbollah, issued an imminent threat to the citizens of northern Israel. He threatened a catastrophic attack on Haifa's ammonia storage tanks, which would "lead to the death of tens of thousands of residents and 800,000 Israelis would be affected."

Nasrallah declared that "this would be exactly as a nuclear bomb and we can say that Lebanon today has a nuclear bomb...we are able with only a few rockets to target gas containers in Haifa and kill tens of thousands" of innocent Israeli civilians...

Hezbollah's military buildup and murderous threats are unacceptable. When a terrorist organization publicly threatens the civilians of another country, silence is not an option.

I call on you to publicly condemn this dangerous and aggressive statement and to demand that the government of Lebanon live up to its commitments and fully implement Security Council Resolution 1701..."
Date
February 17, 2016
Title
Amb. Danon Places Hezbollah in UN Diplomatic Crosshairs after Nasrallah Threatened Israel with “Catastrophic” Nuclear-like Attack, Permanent Mission of Israel to the United Nations
Original Source
http://embassies.gov.il/un/statements/letters/Pages/Nassrallah-letter.aspx
Attachment
Click here to view this article in MS Word/PDF format