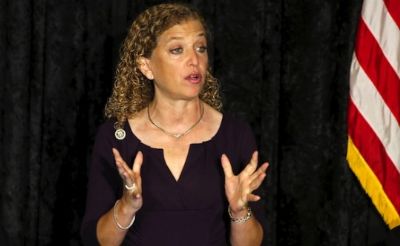 House Representative Debbie Wasserman Schultz was one of seven representatives to call for immediate punitive sanctions against Iran. (Reuters)
"Some of President Obama's closest Democratic allies are joining Republicans in calling on the administration to reverse course and sanction Iran for illicit missile tests.

The White House had notified Congress of looming sanctions last week and then abruptly pulled back, without offering a specific explanation for the delay.

Republicans swiftly slammed the decision as a weak-kneed response to an increasingly belligerent regime, but top Democrats including party Chairwoman Debbie Wasserman Schultz are now joining in -- urging the administration to act 'immediately' to penalize Tehran.

'The United States and our allies must take immediate, punitive action and send a clear message to Iran that violating international laws, treaties, and agreements will have serious consequences,' Schultz, D-Fla., and six other House Democrats wrote in a letter Wednesday to Obama...

'Inaction from the United States would send the misguided message that, in the wake of the [nuclear deal], the international community has lost the willingness to hold the Iranian regime accountable for its support for terrorism and other offensive actions throughout the region,' they wrote.

The lawmakers pointed to several Iranian missile launches â including a test in October deemed a violation of a U.N. Security Council resolution, and another in November that the U.N. has not yet ruled on. They also cited reports last week that an Iranian rocket came within 1,500 feet of a U.S. aircraft carrier in the Strait of Hormuz.