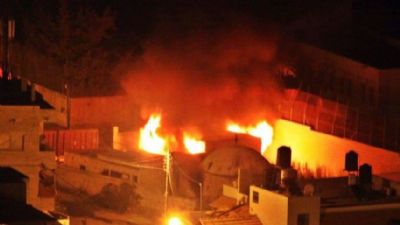 The Tomb of Joseph after being set ablaze by Palestinians on October 16, 2015 (screen grab)
"On the same day as Palestinians torched a site containing Joseph's Tomb in the Palestinian Authority-controlled West Bank city of Nablus, the United Nations Security Council held an 'emergency' session to address the escalating violence in Jerusalem and the West Bank. The October 16th meeting was called by Jordan, a non-permanent member of the Security Council.

Israeli Prime Minister Netanyahu has expressed his willingness to meet with the Palestinian leadership and resume peace talks immediately without preconditions, in order to bring calm to the region. The Palestinian leadership's response was to have Jordan act as their promoter-in-chief and call on the Security Council to hold the 'emergency' meeting for the purpose essentially of condemning Israel and rationalizing the Palestinian killing spree.

Mr. TayÃ©-Brook Zerihoun, Assistant Secretary General for Political Affairs, briefed the Security Council on the latest developments. Although strongly condemning the attack on Joseph's Tomb, Mr. Zerihoun tried to explain away the wave of Palestinian violence in general as stemming from the 'persistence of the occupation and the diminishing prospects of achieving Palestinian aspirations for statehood.' He also threw in the 'continued and expanding settlement activities' as contributing 'to the anger and frustration driving the violence we are seeing today.' Finally, he added the widespread unfounded fears in the Muslim world that 'Israel is aiming to change the status quo at the holy sites.'

There is no justification whatsoever for random stabbings of innocent civilians including children, women and the elderly. But that is exactly what Palestinian assailants have been doing while the so-called 'international community' looks the other way. Israel has every right to use whatever means of restraint it deems necessary to protect its own civilians from such harm. Indeed, that is the first obligation of any responsible state â to defend its own citizens. Yet vacuous phrases such as 'collective punishment' and 'violations of international law' are thrown at Israel for trying to contain the violence instigated by Palestinian thugs..."
Date
October 18, 2015
Title
United Nations Apologists for Deadly Palestinian Violence, Canada Free Press
Author(s)
Joseph A. Klein
Original Source
http://canadafreepress.com/article/76126
Attachment
Click here to view this article in MS Word/PDF format