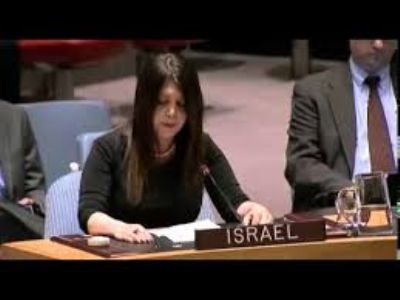 Israeli Counselor on Human Rights, Nelly Shiloh (File photo)
"The topic we are here to discuss today is 'The Rise of Global Genocidal Anti-Semitism', this is not an academic discussion of dark times from our history. Unfortunately, the issue we confront here today is as acute and relevant as ever.

When the chant 'death to Jews' can be heard on the streets of Paris,

When synagogues in Europe must be protected by armed guards,

When vile anti-Semitic images can be found in the Palestinian press and in newspapers throughout the Arab world- we must stand up and pay attention.

These signs of renewed hatred of Jews, just because they are Jews, must serve as a wake-up call for the international community and for the United Nations.

Anti-Semitism is not a relic from the past, but an ever-present reality for Jews in many places. We must take action now, to eradicate the plague of Jew-hatred from our future.

We must come to grips with the reality that within living memory of the holocaust, the Jews of Europe fear to wear a Kippah in public, and think twice before identifying themselves as Jews. Anti-Semitic graffiti is now a common sight, and Jews around the world face daily insults on the streets. We know all too well, as history tells us over and over, that what starts with hateful and degrading taunts, ends with violence and murder...

Schools, grocery stores, places of worship, educational centers- in the very places where people come together as a community, a basic sense of security has been shaken. Brave leaders in these countries have spoken out, and we applaud their solidarity with Jews as fellow countrymen, but much more needs to be done...

Targeting Jewish businesses, places of worship, and Jews themselves is no less anti-Semitic when it is done out of perceived wrongs committed by Israel. Singling out Jews, and only Jews, as powerful, tribal, disloyal, and devious should be seen for what it is- a restatement of classical anti-Semitism.

And- we must state frankly- deligitimization of Israel, the one and only Jewish state, may be nothing more than a pretext for prejudice. It can be a way for those who hate Jews to express their hatred without suffering the shame of being publically identified as an anti-Semite...

When Israel is condemned as an illegitimate state,

When the Jewish state is denounced as racist just for being Jewish,

- A clear line has been crossed.

Such outrageous slander of Israel has little to do with Israel's actions, and a lot to do with the hateful prejudice of those who make them..."
Date
August 12, 2015
Title
Statement: Rise of Global Genocidal Antisemitism, Permanent Mission of Israel to the United Nations
Original Source
http://embassies.gov.il/un/statements/Pages/Israel%E2%80%99s-statement-on-The-Rise-of-Global-Genocidal-Antisemitism-.aspx
Attachment
Click here to view this article in MS Word/PDF format