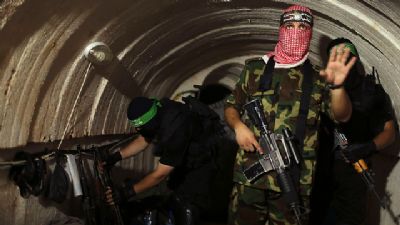 According to the report, Israel and Hamas have the same combat ethics and operational procedures (Reuters)
"The main problem with the United Nations report on Operation Protective Edge is that it artificially tries to create a moral and legal symmetry between the State of Israel and the IDF â and Hamas and the other Palestinian organizations.

The report fails to mention the fact that Hamas is the one which opened fire and initiated the fighting, and it gives no weight to the fact that Israel did everything in its power to reach a ceasefire before moving on to a full-scale counterattack, including a ground offensive in the Strip.

A second fact that the report does not emphasize sufficiently is that Hamas intentionally opened fire in order to harm Israeli civilians, while the IDF hurt those defined as 'non-fighters' unintentionally and did everything in its power to minimize the number of civilian casualties.

This fact makes all the difference between Hamas' intention to target Israeli civilians indiscriminately â children, women, adults and elderly people â and the IDF's sincere effort to avoid hurting a non-fighting population...

If nothing radical is done in the international arena to neutralize the effect of the 'second Goldstone report,' this report may critically erode Israel's ability to defend itself in the next war, whether it erupts in the north or in the south."
Date
June 23, 2015
Title
UN Report Gives Hezbollah the Green Light, YNet News
Author(s)
Ron Ben-Yishai
Original Source
http://www.ynetnews.com/articles/0,7340,L-4671655,00.html
Attachment
Click here to view this article in MS Word/PDF format