On Iran, the U.N. Proves Its Uselessness Once Again 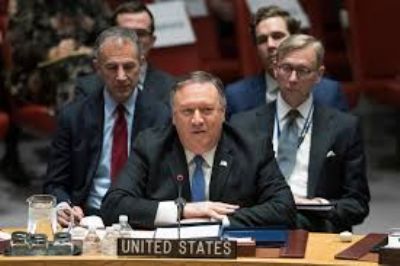 U.S. Secretary of State Mike Pompeo at the U.N. Security Council (File photo)
"Given a recent surge in belligerent behavior by Iran and clear evidence that it cheated on the JCPOA, the deeply flawed 2015 nuclear deal, President Trump wants to reimpose U.N. sanctions that were lifted by the prior agreement. To do this, Trump wants to trigger a 'snap-back' provision in a 2015 U.N. Security Council resolution. Security Council members - led by Russia, China, and America's European allies - are blocking this effort because they prefer to appease Iran and protect the worthless nuclear deal.

On August 25, the Security Council's current president refused to take up the U.S. snap-back proposal. By doing so, U.N. members are choosing to look the other way on a growing list of dangerous Iranian provocations and JCPOA violations. They also are validating President Trump's conclusion that staying in the JCPOA and trying to rein in Iran through the U.N. is not in the national security interests of the United States...

The growing list of dangerous and belligerent actions by Iran and clear evidence of its cheating on the JCPOA more than justify President Trump's decision to withdraw from the nuclear deal and implement his successful 'maximum pressure' strategy, which is limiting Iran's access to advanced technology it could use in its nuclear weapons and missile programs as well as funds to spend on terrorism and the Iranian military..."
Date
August 30, 2020
Title
On Iran, the U.N. Proves Its Uselessness Once Again, National Review
Author(s)
Fred Fleitz
Original Source
HTTPS://WWW.NATIONALREVIEW.COM/2020/08/IRAN-NUCLEAR-DEAL-UNITED-NATIONS-PROVES-USELESS/
Attachment
Click here to view this article in MS Word/PDF format