The U.N. Blacklist: Don't Be Bullied 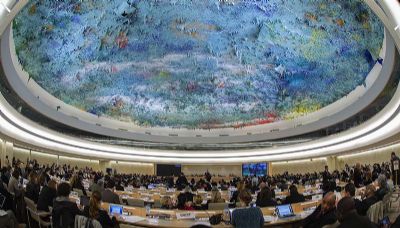 The UN Human Rights Council
"Last week, the United Nations Human Rights Council (HRC) â an overtly political body that hypocritically includes some of the world's worst human rights violators â published a blacklist of companies that they claim do business with, or in, Israeli settlements. The goal was to defame these companies by falsely implying that they are responsible for human rights violations.

HRC did this despite the fact that it has neither the capacity nor the competence nor the authority to deal with business enterprises or promote non-binding politically-biased guidelines with respect to business practices.

To be clear, there is no international law whatsoever prohibiting business activity in conflict areas, occupied territory, or settlements...

Publishing the list was an attempt by HRC to damage Israel's economy and â as per the description of UN officials â was specifically aimed at companies owned by, or do business with, Jews. It was meant to bolster the anti-Semitic Boycott, Divestment, and Sanctions (BDS) campaign. In an uncharacteristically honest moment, High Commissioner Michelle Bachalat actually admitted that the process that produced the list was 'unprecedented.' Despite the fact that business activity in disputed territories is not uncommon internationally, no other countries have been targeted for boycotts. Unfortunately this discriminatory treatment of Israel is not surprising, and reflects the HRC's well-documented institutional bias against the Jewish state..."
Date
February 20, 2020
Title
The UN Blacklist: Don’t Be Bullied, The Jewish Press
Author(s)
Mark Goldfeder and Gary Epstein
Original Source
https://www.jewishpress.com/indepth/opinions/the-un-blacklist-dont-be-bullied/2020/02/20/
Attachment
Click here to view this article in MS Word/PDF format