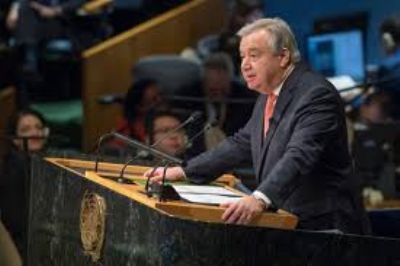 U.N. Secretary-General Antonio Guterres (File photo)
"A bipartisan group of House lawmakers is calling on the United Nations to implement recommendations to combat anti-Semitism that were laid out in a report by the organization last year.

In a letter to United Nations Secretary-General AntÃ³nio Guterres on Monday led by Reps. Lee Zeldin (R-N.Y.), David Cicilline (D-R.I.), Brian Mast (R-Fla.) and Brad Sherman (D-Calif.) and signed by 104 House members, the lawmakers argued that the U.N. should implement the report's call for the appointment of a senior-level point within the secretary general's office that would be responsible for engaging with Jewish communities around the world.

'Under the report's recommendation for the United Nations System, it suggests that the Secretary General should consider appointing 'a senior-level focal point in the Executive Office of the Secretary-General with responsibility for engaging with the Jewish communities worldwide, as well as for monitoring antisemitism and the response of the United Nations thereto,' the letter said.

'We strongly urge you to implement this recommendation, as we believe the appointment of a senior-level leader â similar to roles that have been created in the United States, European Union, France, Germany, and the United Kingdom â would enable the United Nations to take significant steps in the fight against hatred of the Jewish people,' the letter continued..."
Date
January 27, 2020
Title
House lawmakers urge adoption of U.N. report’s recommendations on battling anti-Semitism, The Hill
Author(s)
Juliegrace Brufke
Original Source
https://thehill.com/homenews/house/480167-house-lawmakers-urge-adoption-of-un-reports-recommendations-on-battling-anti
Attachment
Click here to view this article in MS Word/PDF format