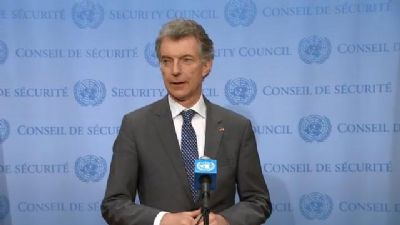 German Ambassador to the U.N. Christoph Heusgen (File photo)
"The Simon Wiesenthal Center (SWC) in Los Angeles publishes an annual list of the ten worst global antisemitic and anti-Israel incidents. In 2019, Christoph Heusgen, Germany's UN Ambassador, is in seventh place. Germany is currently a member of the UN Security Council. In its explanatory text, the SWC quoted an editorial from Germany's largest daily Bild.

In explaining one of his anti-Israel votes, Heusgen made a statement at the UN, which was both nonsensical and vile: 'We believe that international law is the best way to protect civilians and allow them to live in peace and security and without fear of Israeli bulldozers or Hamas rockets.'

In March 2019, Bild wrote a response to Heusgen's statement comparing Palestinian rockets with Israeli bulldozers. It said: 'This equivalence is pure malice. That in a week in which the Israeli population frequently had to flee for rocket shooting by Hamas terrorists. Referral to the bulldozers, however, is a measure which the Israeli government takes against illegal building which concerns mainly Palestinians, but also Israeli settlements.'...

The antisemitic votes by Germany at the UN must be seen in an even more negative light than those of other European countries. This, it goes without saying, is due to the country's genocidal crimes that included the murder of 6 million Jews, among them 1.5 million children, during the Holocaust - this a short time ago, in their grandfathers' generation..."
Date
January 8, 2020
Title
Germany’s anti-Israel UN votes in 2019 – a wakeup call, Arutz Sheva
Author(s)
Manfred Gerstenfeld
Original Source
http://www.israelnationalnews.com/Articles/Article.aspx/25001
Attachment
Click here to view this article in MS Word/PDF format