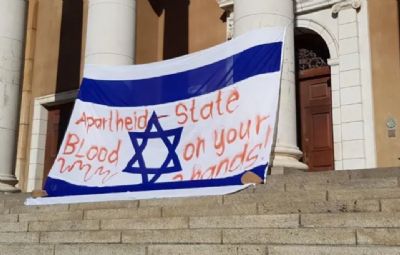 A bloodied Israeli flag at the University of Cape Town at the start of Israel-Apartheid Week. (Photo credit: South Africa Union of Jewish Students/FACEBOOK)
"The US questioned the legitimacy of a UN committee on racism's plan to probe a Palestinian claim that Israel is an apartheid state.

The remarks came two weeks after the Committee on the Elimination of Racial Discrimination (CERD) accepted an inter-state communication from the 'State of Palestine' against Israel. While the text of the Palestinian complaint has not been released, an Israeli diplomatic source said it calls Israel an apartheid state and claims its treatment of the Palestinians is a form of racism.

Following the Palestinian petition against Israel last year, CERD asked the UN Office of Legal Affairs whether it has jurisdiction on the matter, and was told that it does not under international treaty law.

However, in late December, CERD decided that treaty law does not apply here, because its convention is for 'the common good.'

Andrew Bremberg, US Ambassador to International Organizations in Geneva, expressed his country's 'profound disappointment' in the decision.

'The Committee's disregard for treaty law raises serious questions about the legitimacy of this process,' Bremberg stated. 'The US will continue to advocate for fair treatment for Israel in this and other international fora.'..."
Date
January 7, 2020
Title
UN panel has no authority to declare Israel apartheid state, US says, The Jerusalem Post
Author(s)
Lahav Harkov
Original Source
https://www.jpost.com/Israel-News/UN-panel-has-no-authority-to-declare-Israel-apartheid-state-US-says-613453
Attachment
Click here to view this article in MS Word/PDF format