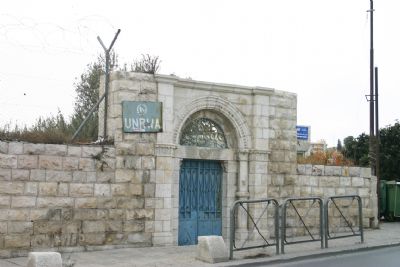 UNRWA building in Jerusalem (File photo courtesy Wikimedia Commons)
"The timing of the Palestinian Authority being called to task for antisemitism in its textbooks by the United Nations Committee on the Elimination of Racial Discrimination coincides with the UNRWA mandate coming under debate for renewal every five years, since 1949.

This year, for the first time, there will be no automatic renewal.

What is the connection between the PA textbooks and UNRWA?

I personally interviewed Dr. Na'im Abu Hummus, who was then Palestinian education minister, at his office on August 1, 2000, the very day the first textbooks published by the PA curriculum were provided to UNRWA.

In that interview, Al-Hummus explained that the PA had contracted with UNRWA to function as the exclusive supplier of schoolbooks for all UNRWA schools in Judea, Samaria, Gaza and Jerusalem.

That day, the PA provided the Center for Near East Policy Research (CFNEPR) with its first 80 school books, and the center has over the last 19 years received and examined all 365 school books which the PA has supplied to UNRWA.

Conclusions? The CFNEPR has found that PA textbooks used by UNRWA have been indoctrinating virulent antisemitism into the hearts and minds of refugees from the 1948 War of Independence and their descendants... PA school books contain consistent, crude, anti-Israeli, anti-Zionist and even antisemitic expressions, contradicting UNRWA's neutral character as a UN organization..."
Date
August 22, 2019
Title
Confronting UNRWA education antisemitism at the UN, The Jerusalem Post
Author(s)
Arnon Groiss, David Bedein
Original Source
https://www.jpost.com/Opinion/Confronting-UNRWA-education-antisemitism-at-the-UN-599340
Attachment
Click here to view this article in MS Word/PDF format