The Palestinians Are a Superpower at the U.N. But a Weak Mess in Reality 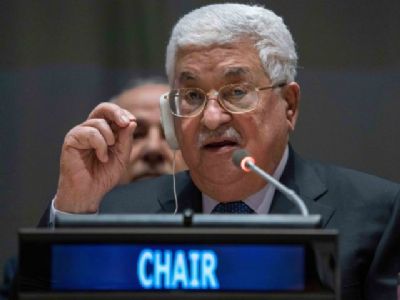 Palestinian Authority President Mahmoud Abbas
"The United Nations (UN) is often a theater of the absurd, where events take place that represent the exact opposite of reality. So it was with the Palestinians and the G-77 last week. Palestinian Authority Chairman and Palestine Liberation Organization (PLO) chief Mahmoud Abbas assumed the presidency Tuesday of the largest United Nationa bloc â the Group of 77 plus China - as the 'President' of 'the State of Palestine.'

The G-77 has 134 member nations. On the face of things, electoral victory at the G-77 is a stunning victory for Abbas and a scathing defeat for Israel.

The most stunning aspect of the Palestinian presidency is that 'the State of Palestine,' which was elected to lead the group of developing nations, doesn't exist...

Israel is condemned more than all other UN member states put together. The UN has a special day set aside each year bemoaning Israel's very existence. Condemning Israel is a permanent agenda item at the UN Human Rights Council. The UN Educational, Scientific and Cultural Organization (UNESCO) devotes its energy to erasing Jewish history from the history books and condemning Israel for refusing to get with the program.

All this, as every tin pot dictatorship wins senior positions on the most illustrious â and progressive â committees. All this, as the Palestinians have done nothing but reject peace and work for Israel's destruction for the past hundred years.

And now, by elevating the non-existent State of Palestine to lead them for the next year, the G-77 has given the Palestinians their greatest victory yet. Palestine may not be a state in the real world. But at the UN, it is a superpower.

Yet at the end of the day, facts on the ground actually matter. And on the ground, Palestine isn't a state. Abbas isn't a president, and he isn't legitimate..."
Date
January 20, 2019
Title
The Palestinians Are a Superpower at the UN But a Weak Mess in Reality, Breitbart News
Author(s)
Caroline Glick
Original Source
https://www.breitbart.com/middle-east/2019/01/19/caroline-glick-the-palestinians-are-a-superpower-at-the-un-but-a-weak-mess-in-reality/
Attachment
Click here to view this article in MS Word/PDF format