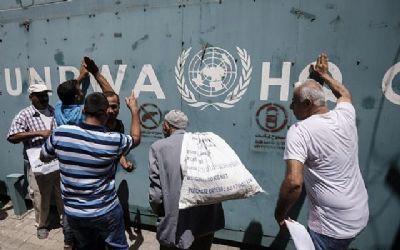 UNRWA employees and their families at a protest (File photo)
"The Trump Administration will announce in the next few days that it rejects the long-standing Palestinian demand for a 'right of return' for millions of refugees and their descendants to Israel, an Israeli television report said Saturday night. The US will announce a policy that, 'from its point of view, essentially cancels the 'right of return,' the report said.

The 'right of return' is one of the key core issues of dispute in the Israeli-Palestinian conflict. The Palestinians claim that five million people - tens of thousands of original refugees from what is today's Israel, and their millions of descendants - have a 'right of return.' Israel rejects the demand, saying that it represents a bid by the Palestinians to destroy Israel by weight of numbers. Israel's population is almost nine million, some three-quarters of whom are Jewish. An influx of millions would mean Israel could no longer be a Jewish-majority state.

According to the Hadashot TV report Saturday, the US in early September will set out its policy on the issue. It will produce a report that says there are actually only some half-a-million Palestinians who should be legitimately considered refugees, and make plain that it rejects the UN designation under which the millions of descendants of the original refugees are also considered refugees. The definition is the basis for the activities of UNRWA, the UN's Relief and Works Agency for Palestine Refugees..."
Date
August 25, 2018
Title
US set to announce it rejects Palestinian ‘right of return’ – TV report, The Times of Israel
Author(s)
TOI STAFF and ERIC CORTELLESSA
Original Source
https://www.timesofisrael.com/us-set-to-announce-it-rejects-palestinian-right-of-return-tv-report/
Attachment
Click here to view this article in MS Word/PDF format