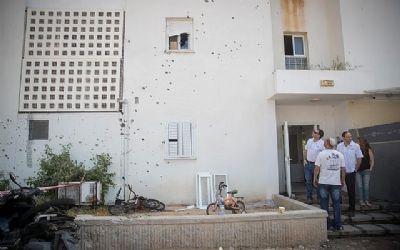 The site where a mortar shell from the Gaza Strip hit an apartment building and cars in the southern Israeli city of Sderot, on August 9, 2018.
"Israel's envoy to the United Nations urged Secretary-General Antonio Guterres and the UN Security Council to denounce Hamas following the firing of over 180 projectiles toward Israeli territory from the Gaza Strip.

In a letter to Guterres and the members of the Security Council, Danny Danon said Hamas, the terror group that rules Gaza, bears sole responsibility for the injuries and damage caused by the rocket and mortar launches.

'Alarms have once again shattered the hope of the children of southern Israel for a quiet summer vacation â no country would tolerate such a situation. The international community must condemn Hamas and place the responsibility for this unacceptable onslaught on the terrorist organization,' wrote Dannon.

'Israel will continue to take all necessary measures to prevent harm to civilians and to protect its sovereignty,' he added..."
Date
August 9, 2018
Title
Israeli envoy calls on UN to condemn Hamas over Gaza rocket fire, The Times of Israel
Original Source
https://www.timesofisrael.com/israeli-envoy-calls-on-un-to-condemn-hamas-over-gaza-rocket-fire/
Attachment
Click here to view this article in MS Word/PDF format